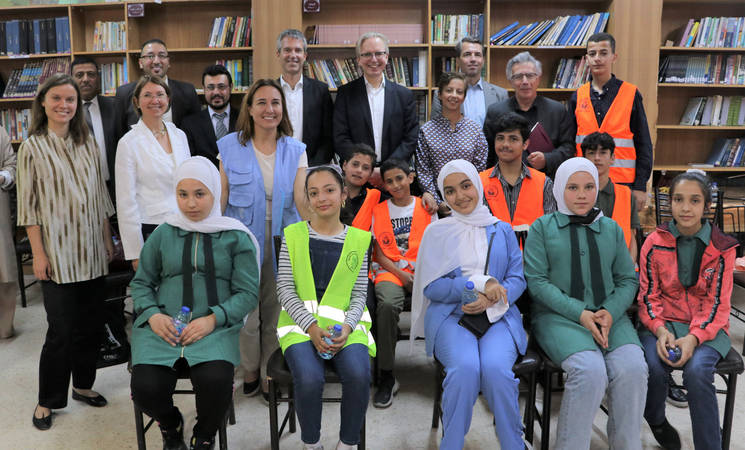 A high-level delegation from the European Union, headed by Mr. Carl Hallergard, Deputy Managing Director in the Middle East and North Africa Department of the European External Action Service, accompanied by Ms. Maria Hadjitheodosiou, European Union (EU) Ambassador to Jordan, visited Baqa’a camp in Jordan on 4 June, where nearly 130,000 registered Palestine refugees live, and engaged with staff and beneficiaries of the United Nations Relief and Works Agency for Palestine refugees in the Near East (UNRWA). The delegation also included members from the office of the EU High Representative for Foreign Affairs.

Members of the delegation were welcomed by the Director of UNRWA Affairs in Jordan, Mrs. Marta Lorenzo, on behalf of the UNRWA Commissioner-General, Mr. Phillipe Lazzarini, and were briefed on the Agency’s education programme, highlighting the need for Palestine refugee students to keep up with technological developments and digitialization in education. The delegation met with students from the UNRWA student parliament and had a lively interaction with them with questions focused on most recent transformations in education and the learning process.

The delegation then visited an UNRWA health centre where they were briefed about the Agency’s health programme, its achievements and challenges and met with beneficiaries. The delegation toured the camp and was briefed on the Agency’s vital services, including solid waste management and environmental challenges. The tour also included a visit to one of the shelters where some membersmet with a family registered in the UNRWA Social Safety Net and exchanged discussions on the needs of vulnerable families, most importantly the rehabilitation of their zinc-roof shelters.

The Director of UNRWA Affairs in Jordan, Mrs. Lorenzo expressed her appreciation of the historical partnership between the EU and UNRWA, as well as the support extended to Palestine refugees. Mrs. Lorenzo called for the international donor community to fund UNRWA so that it could continue with its vital services to Palestine refugees in the region, while highlighting the EU’s recently announced proposal for a three-year multiyear contribution of EUR 246 million to the Agency.

The European Union’s delegation highlighted the importance of continuing to fund the vital services UNRWA provides to around 5.8 million Palestine refugees in the Agency’s five fields of operations in Jordan, the West Bank, including East Jerusalem, Gaza, Lebanon and Syria.

The EU delegation arrived in Jordan  in the context of the Association Council to launch new Partnerships Priorities between the EU and Jordan in which the two parties stressed the crucial role of UNRWA for security and stability in the region, in accordance with its UN mandate, and expressed their commitment to continue supporting the Agency. In this regard, the EU recalled the EU and UNRWA Joint Declaration of 17 November 2021.

Since 1971, the strategic partnership between the European Union and UNRWA has been based on the shared objective of supporting the human development, humanitarian and protection needs of Palestinian refugees and to promoting stability in the Middle East.

Today, the EU is the largest multilateral provider of international assistance to Palestine refugees. Collectively, the EU and its Member States are also among the largest contributors to the Agency's humanitarian emergency appeals and projects in response to various crises and specific needs across the region.

In 2021, the EU signed a Joint Declaration in support of UNRWA for the period 2021-2024, marking 50 years of partnership. In the Joint Declaration, the EU commits to continue supporting UNRWA politically and in securing predictable, multi-annual financial resources to enable the Agency to fulfil its mandate and provide its essential services to Palestinian refugees.