The European Union High Representative for Foreign Affairs and Security Policy, Catherine Ashton, and the Commissioner-General of the United Nations Relief and Works Agency for Palestine Refugees in the Near East (UNRWA), Filippo Grandi, signed today at UNRWA’s Gaza Training Centre a € 55.4 million financing agreement towards the Agency’s General Fund.

The EU contribution is the largest single donation to UNRWA’s core budget, which supports the Agency’s regular activities in education, health, relief and social services and camp improvement. The grant will fund these essential services to Palestine refugees throughout Gaza, the West Bank, Jordan, Syria and Lebanon.

Speaking at a signing ceremony at UNRWA‘s Vocational Training Centre in Gaza City, Grandi expressed gratitude to the EU for its firm support of UNRWA: "I would like EU citizens to know that thanks to their generosity, refugee children will go to school, the health of families and communities will be improved, and many of the most vulnerable Palestinians will be less poor. The concrete, substantial impact of this contribution is even more significant as it happens at a time when millions in the region are calling for better lives and more opportunities." 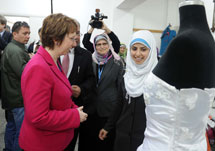 The EU High Representative Catherine Ashton said during her visit that "the continued EU support to UNRWA is an essential element of the EU strategy to bring peace and stability to the region. The € 55.4 million contribution we are signing today represents our ongoing commitment to Palestine refugees. It will support UNRWA‘s general fund, the main engine that keeps the organization going and provides all its essential services. I am very pleased we can announce this from Gaza today and would like to pay tribute to the important work UNRWA is doing for the population of Gaza".

High Representative Ashton and Commissioner-General Grandi also met with youth leaders at the Gaza Training Centre, a unique opportunity to exchange views and raise issues of mutual interest with the youth community, before moving on to speak with business and civil society leaders at Atfaluna Society for Deaf Children, a registered Palestinian NGO in Gaza City supported by the EU.

The European Union is the largest multilateral provider of international assistance to Palestine refugees. Over the period 2000 to 2011, the EU, excluding EU member states alone, has provided approximately €1.2 billion of support to the Agency. This funding has enabled human development for the most vulnerable Palestine refugees in Gaza, the West Bank, Jordan, Lebanon and Syria.