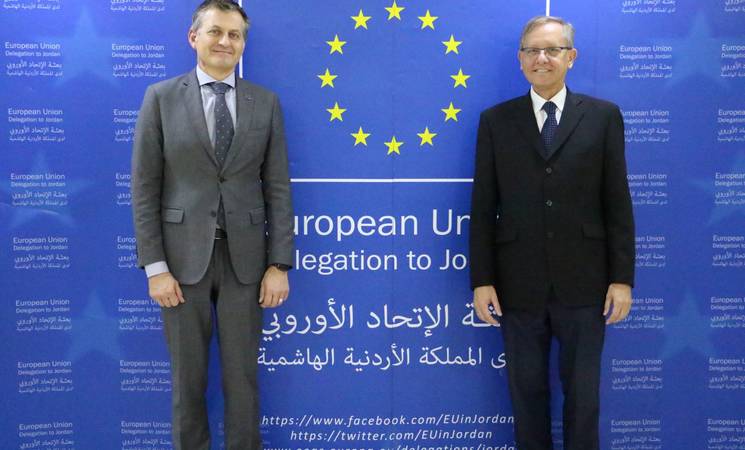 Today, the European Union member states (Madad Fund) contributed EUR 2 million to the United Nations Relief and Works Agency for Palestine Refugees in the Near East (UNRWA) as part of the EU's “Strengthening the Resilience of Palestine Refugees in Jordan and Lebanon” project. The contribution comes in-line with the Agency’s 2019 Syria Regional Crisis Emergency Appeal and will be allocated to fund vital life-saving services to the Palestine refugees from Syria (PRS) residing in Jordan.

This year the conflict in Syria entered its eighth year. Palestinian refugees have borne the brunt of its devastating consequences across the region, facing extreme danger in their camps of residence and multiple displacements. This generous contribution will enable the Agency to provide essential services to some 17,500 PRS in Jordan, including protection, education in emergencies and health care, in addition to operational costs that enhance the Agency’s ability to provide services to the most vulnerable Palestinian refugees in the region.

In his speech the Ambassador of the European Union to Jordan, H.E. Andrea Matteo Fontana said: "EU is proud to support UNRWA, particularly in Jordan, which has received many Palestinian Refugees from Syria (PRS). Faced with limited livelihood opportunities, the PRS continue to struggle to meet their basic needs. The EU's contribution to UNRWA in Jordan will help provide these Palestinian refugees with emergency cash assistance to help them cope with shocks or address urgent protection needs."

Speaking at the announcement ceremony, the Director of UNRWA Operations in Jordan, Roger Davies expressed his gratitude to the EU for its continuous support to UNRWA and in particular its member states for their support to the Palestine Refugees from Syria in Jordan, saying: “It is fulfilling that my final official engagement is to meet with the EU, a longstanding supporter of UNRWA and the Palestine refugees since 1971. Today, the European Union and in particular the MADAD countries have renewed their commitment to the Palestine refugees affected by the crisis in Syria. UNRWA will be able to provide critical services and support to vulnerable Palestine Refugees from Syria in Jordan, the contribution will support providing an enabling environment for this segment of refugees through prevention and response to protection risks and international rights violations."

The European Union and UNRWA have a strategic partnership governed by the shared objective to support the human development, humanitarian and protection needs of Palestine refugees and promote stability in the Middle East. The European Union is the largest multilateral provider of international assistance to Palestine refugees. This reliable and predictable support from the European Union enables UNRWA to provide daily quality education for roughly half a million children and primary health care for more than 3.5 million patients in Jordan, Syria, Lebanon, the West Bank and Gaza. This has allowed millions of Palestine refugees to be better educated, live healthier lives, access employment opportunities and improve their living conditions, thus contributing to the development of the entire region.