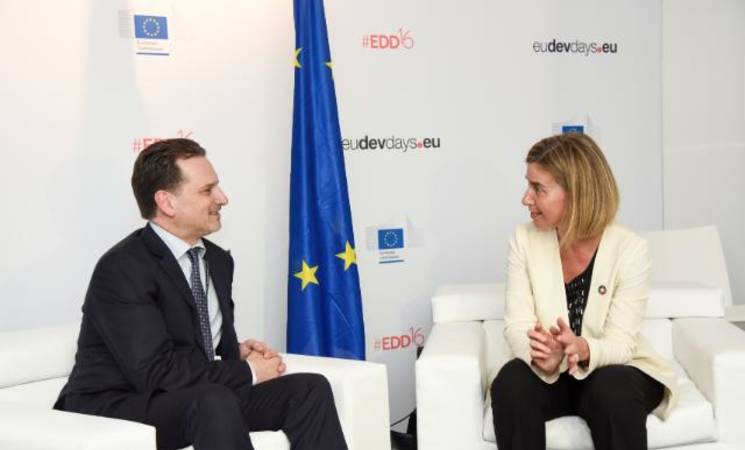 During UNRWA Commissioner-General Pierre Krähenbühl’s visit to Brussels, Belgium, from 13 to 16 June 2016, the EU and UNRWA agreed to renew their Joint Declaration for the period from 2017 to 2020. The renewal will allow for predictable yearly contributions from the EU to the Agency’s delivery of quality education, high-standard health care, and much-needed relief and social services to Palestine refugees in the highly volatile Middle East region.

Through this commitment, the EU reaffirms the crucial contribution of UNRWA to the development and stability of the Middle East. The decision to renew the agreement comes at a time when UNRWA faces unprecedented operational challenges – 60 per cent of Palestine refugees are living in zones of armed conflict or occupation and face increasing levels of poverty, isolation and despair – and serious financial pressure to meet the growing needs of the refugee population.

"Through its important work, UNRWA makes a crucial difference to the lives of millions of Palestinian refugees. As the largest donor to its activities, the EU continues to stand shoulder to shoulder with UNRWA as it provides Palestinian refugees with crucial services such as health, education and jobs in what are very challenging conditions,” said High Representative of the Union for Foreign Affairs and Security Policy and Vice-President of the European Commission Federica Mogherini.

The renewal of EU support is a recognition of the Agency’s invaluable response capacity in highly unstable contexts, its very effective direct delivery model and its ability to combine emergency activities and longer-term development approaches for a community of 5.2 million Palestine refugees.

The EU also values the Agency’s commitment to reform and improve the cost-effectiveness of its programmes, while preserving the delivery of quality services to Palestine refugees.

“At a time when Palestine refugees face a near existential crisis, are deeply concerned about the instability around them and are profoundly worried about the sustainability of services they need, the renewal of the EU-UNRWA Joint Declaration is a strong message. It represents a multi-year engagement and highlights the EU’s attachment to UNRWA’s mandate and to the dignity the Agency provides to Palestine refugees. We are grateful for this important support and are committed to carrying out our activities in ways that ensure proper efficiency and continue to generate trust,” said UNRWA Commissioner-General Pierre Krähenbühl.

The European Union is the largest multilateral provider of international assistance to Palestine refugees, providing crucial and reliable support to UNRWA since 1971. Between 2007 and 2015, the European Union contributed over EUR 1.1 billion in support of UNRWA, including close to EUR 900 million for the Programme Budget that supports among others the daily education of half a million Palestine refugee children in the Near East. In addition, the EU has generously contributed to UNRWA humanitarian emergency appeals and projects in response to various crises and specific needs across the region. EU Member States provide additional crucial support to the Agency. The partnership between the EU and UNRWA has allowed millions of Palestine refugees to be better educated, live healthier lives, access employment opportunities and improve their living conditions, thus contributing to the development of the entire region.

"I am determined to help students to be outstanding"
The European Union announces EUR 246 million three-year contribution in support of UNRWA and Palestine Refugees
While scars of conflict are still clear, hope and resilience among students remains steadfast
Hairdressing promoting empowerment in Lebanon: EU support galvanizes success
EU support to the education of Palestine refugees
EU and UNRWA: Together for Palestine Refugees
Al Shuraka 13