On 11 November 2013, the European Union (EU) signed an agreement with the United Nations Relief and Works Agency for Palestine Refugees in the Near East (UNRWA), under which the EU will provide EUR 12 million (US$ 16.3 million) towards the reconstruction of the Palestine refugee camp of Nahr el-Bared, in North Lebanon.

This generous donation will support the reconstruction of 382 residential units, making it possible for approximately 1,700 residents to return to live in the camp. In addition, 68 commercial units will be reconstructed, contributing to the renewal of commercial life within Nahr el-Bared. It is anticipated that the units, which are located in Package 4 and Package 5 of the camp, will be completed by mid-2015.

In 2007, clashes between Fatah al-Islam and the Lebanese Armed Forces in forced over 6,000 refugee families – a total of nearly 26,000 registered Palestine refugees and over 1,000 Lebanese residents of the camp – to abandon Nahr el-Bared, leaving behind homes and livelihoods. Following the end of the conflict, the Government of Lebanon and the international community committed to rebuilding the destroyed camp.  UNRWA was charged with leading the relief and reconstruction effort and set out to rebuild the camp.

The reconstruction of Nahr el-Bared camp is the largest single project the Agency has ever undertaken. Of an estimated cost of US$ 345 million, UNRWA has, to date, raised US$ 188 million in donations from the international community. This has enabled it to oversee the completion of one quarter of the approximately 5,000 residential units that will eventually be provided while continuing to seek the remaining US$ 157 million needed to complete the reconstruction project.

The new donation from the EU, through its Instrument for Stability measure, represents a significant contribution to the reconstruction of Nahr el-Bared and the rebuilding of the community. 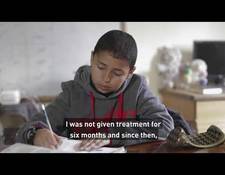