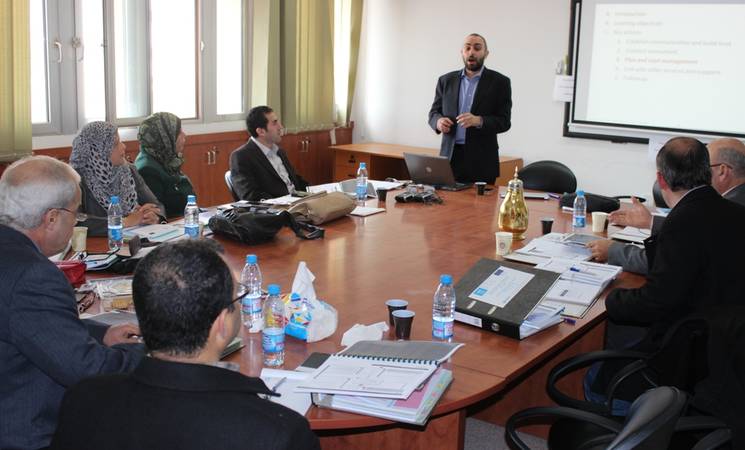 UNRWA is currently mainstreaming mental health and psychosocial support (MHPSS) as a cross cutting issue, advocating for a holistic and multidisciplinary approach to address MHPSS needs of Palestine refugees. In this context, UNRWA Lebanon Filed Office is developing the capacities of frontline staff from all core departments by introducing a shared approach to identify MHPSS needs, provide basic support and if needed carry out qualified referrals.

The Agency’s Health Programme in Beirut will be conducting the Mental Health Gap Assistance Programme Training (mhGAP-IG) for one week from April 13 to 16, 2015, focusing on 41 general practitioners working in UNRWA twenty seven health centers in a series of four trainings implemented between April and June 2015. Medical staff will be equipped with enhanced capacity in mental health and psycho-social support, detection of mental health disorders and tailored pharmacological interventions in non specialized health care centers.
The training was developed by the World Health Organization (WHO) and adapted for UNRWA – Lebanon, within the framework of the project ‘Improving the Living Conditions of Palestine Refugees in Lebanon’, funded by the European Union (EU).
As the Chief of UNRWA Health Programme in Lebanon, Dr. Najeh El-Sadek said: “This training is an important step in integration of mental health and psychosocial support within UNRWA primary health care settings. Thanks to the European Union, we will be able to provide Medical officers with necessary knowledge and skills to manage key mental health conditions, particularly in light of the current emergency, along with increasing insecurity in the region that has only added to the social and psychological pressure on the Palestine refugee communities”.
The trainings will continue throughout 2015. In parallel, a MHPSS community-based awareness-raising campaign is underway in Palestine refugee camps and gatherings, and which includes the provision of counseling and guidance on psychosocial support to parents and families of children and youth with disabilities.

The EU and UNRWA Partnership

The European Union is the largest multilateral provider of international assistance to Palestine refugees, providing crucial and reliable support to UNRWA since 1971. Between 2007 and 2014, the European Union contributed over EUR 1 billion (US$ 1.44) in support of UNRWA, including US$ 906 million to the General Fund. In addition, the EU has generously contributed to UNRWA humanitarian emergency appeals and projects in response to various crises and specific needs across the region. EU Member States provide additional crucial support to the Agency. The partnership between the EU and UNRWA has allowed millions of Palestine refugees to be better educated, live healthier lives, access employment opportunities and improve their living conditions, thus contributing to the development of the entire region.

The UNRWA Medical Hardship Fund at work in Lebanon
Taking on the world: Palestine Refugee Students in Lebanon Receive International Recognition
An application that tracks the health of mother and child: every pregnant women’s dream!
Palestinian Civil Defense in Lebanon Helps Fight Raging Fires
health department annual report 2018
A Journey Into the Lives of Palestinian Refugees from Syria in Lebanon
Youth Strategic Framework for Palestine Refugees in Lebanon