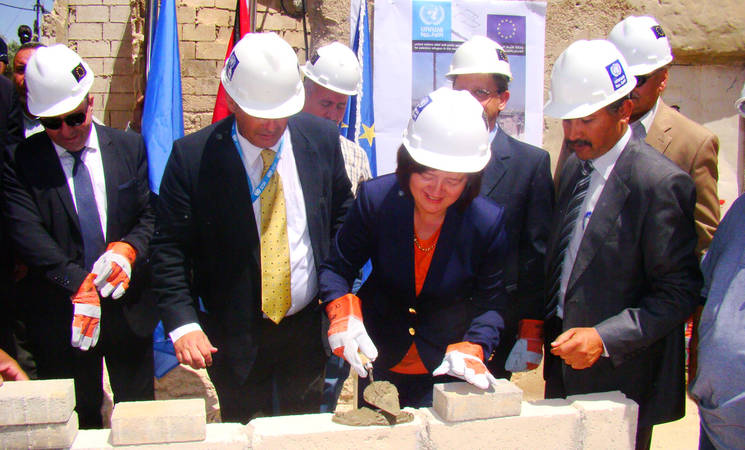 Today, European Union Ambassador and Head of Delegation in Amman, HE Dr. Joanna Wronecka, Director of UN Relief and Works Agency (UNRWA) Operations in Jordan, Roger Davies, and Eng. Rafiq Khirfan, Director of UNRWA and International Organizations in the Department of Palestinian Affairs, laid the first brick of the EU-funded project, ‘Improvement of living conditions for vulnerable refugees in Jerash camp.’ The EU contributed EUR 2 million (US$ 2.7 million) for this project.

In her remarks, Dr. Wronecka said: “With this project, the European Union wishes to reaffirm its solidarity with the Palestinian refugees in Jerash and its commitment to preserve the dignity of its inhabitants.”

The majority of the shelters in Jerash camp were built in 1968, and the poor economic conditions of most families restrict their ability to rehabilitate their homes and extend the shelters to accommodate family growth. Large families often reside in one- or two-room shelters with limited access to daylight or proper ventilation. The 2007 survey of Jerash camp found 65 per cent of shelters to have roofs of zinc or asbestos sheeting. Almost 80 per cent of the households also reported encountering severe problems in winter, including leaking roofs, water seepage through walls and shelter flooding. The poor living conditions are even worse for vulnerable groups within the refugee community: youth, women, the unemployed and those with physical and mental disabilities.

The EU-funded project will provide safe and improved living spaces for 80 of the most vulnerable refugee families in Jerash camp, enabling the refugees to live a more dignified life and helping them to break the cycle of poverty.

Mr. Davies said: “The project comprises three components: shelter rehabilitation, where 80 shelters are expected to be rehabilitated by the end of the project; a comprehensive urban plan for Jerash, where 12-15 projects will be proposed by the local community for submission to donors upon completion; and piloting solar energy use and water harvesting in Jerash.”

During the ceremony, Dr. Wronecka met with some beneficiaries who also attended the ceremony and inquired about their living conditions.

The European Union is a key partner in supporting both the Palestine refugees and UNRWA in the five fields where it operates, including the Hashemite Kingdom of Jordan. Today’s event symbolizes the commitment of the EU citizens to the human rights and dignity of the Palestinian people. This solidarity is deeply appreciated.

The event was also attended by representatives from the Department of Palestinian Affairs and a group of notables and UNRWA staff members.