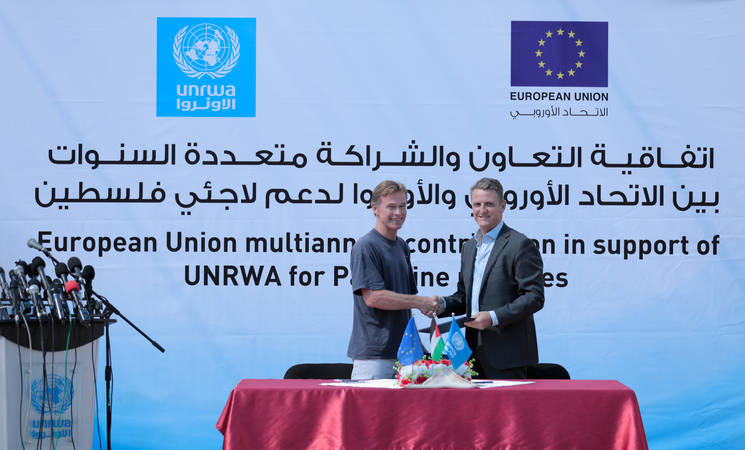 In the aftermath of the latest escalation of violence in the Gaza Strip, the European Union (EU) Representative to West Bank and Gaza, Mr. Sven Kühn von Burgsdorff, and other EU Member States’ representatives visited today UNRWA Beach Preparatory School in Beach Palestine refugee camp. This visit coincided with the signing of the annual EU contribution to UNRWA Programme Budget for 2022, confirming EU and Member States’ steadfast commitment to the rights and human development of Palestine refugees living in Gaza, the West Bank, including East Jerusalem, Jordan, Lebanon and Syria, until a just and lasting solution to their plight.

“I am extremely grateful as the European Union continues to be one of the most reliable donors and a strategic partner for the Agency in 2022. This timely contribution comes as the Agency faces important and deepening financial challenges to implement the mandate received from the UN General Assembly. EU funds will help us sustain essential services, including education, health care and social services to Palestine refugees, who are confronted with immense hardship across the whole region,” said UNRWA Commissioner-General Philippe Lazzarini.

The delegation visiting Gaza was received by the Director of UNRWA Affairs in Gaza, Thomas White, and the UNRWA teams. During the recent escalation, 48 Palestinians were killed, including 17 children and some 450 Palestinians were internally displaced, some of whom took shelter in UNRWA schools. During the emergency, UNRWA staff members in Gaza worked around the clock to ensure continued service delivery to more than 1.4 million Palestine refugees that reside in the besieged Strip.

“The people in Gaza continue to suffer immensely from the hardship caused by 15 years of closure and economic restrictions. This is exacerbated by repeated rounds of violent attacks where so many innocent Palestinians have lost their lives and suffered from injuries. I come here today, together with representatives of EU Member States, to show our solidarity with the victims of the last round of military conflict and to extend concrete support to Palestine refugees, and notably youth and children, through our longstanding partnership with UNRWA. While we encourage all parties to fully uphold the ceasefire, we call for a transparent and independent investigation into the unlawful killing of civilians, including many children and women. Without a fundamental change to the political, security and economic situation in Gaza, including the end of the closure and achieving reconciliation among Palestinian factions, Gazan civilians will be the one paying the price for the lack of political will on the side of Israel as the occupying power and the Palestinian duty bearers to achieve a peaceful solution that allows the creation of a sovereign, viable and democratic Palestinian State of which Gaza is an integral part,” said the European Union Representative Sven Kühn von Burgsdorff.

Under this newly signed agreement, the EU will provide a contribution of EUR 97 million to support the human development work of UNRWA in 2022, including over half a million girls and boys attending UNRWA schools and around two million refugees seeking health care at UNRWA clinics. This contribution also includes a EUR 15 million top-up from the Food and Resilience Facility to mitigate the impact of the Ukraine crisis on food prices and food security for the most vulnerable refugee populations.

For more than 50 years, the EU has established itself as a key strategic partner for the Agency, supporting UNRWA in its efforts to help Palestine refugees achieve their full potential despite their difficult circumstances. The partnership between the EU and UNRWA has evolved over time, with the EU and its Member States becoming the largest multilateral provider of international assistance to Palestine refugees. Last year, the EU signed a Joint Declaration in support of UNRWA for the period 2021-2024.

As an Agency, UNRWA is continually looking to adapt and evolve to match the protracted and unresolved crisis, stretching resources to service the greatest need each year. Since 2015, UNRWA has reduced operational costs by US$ 600 million, whilst maintaining delivery of high quality health and education services for Palestine refugees.

Since 1971, the strategic partnership between the European Union and UNRWA has been based on the shared objective of supporting the human development, humanitarian and protection needs of Palestinian refugees and to promoting stability in the Middle East.

Today, the EU is the largest multilateral provider of international assistance to Palestine refugees. Collectively, the EU and its Member States are also among the largest contributors to the Agency's humanitarian emergency appeals and projects in response to various crises and specific needs across the region.

In 2021, the EU signed a Joint Declaration in support of UNRWA for the period 2021-2024, marking 50 years of partnership. In the Joint Declaration, the EU commits to continue supporting UNRWA politically and in securing predictable, multi-annual financial resources to enable the Agency to fulfil its mandate and provide its essential services to Palestinian refugees.