Home » Newsroom » Press Releases » The European Union Contributes an Additional EUR 4.6 Million in Support of Palestine Refugees
Back to Newsroom

The European Union Contributes an Additional EUR 4.6 Million in Support of Palestine Refugees 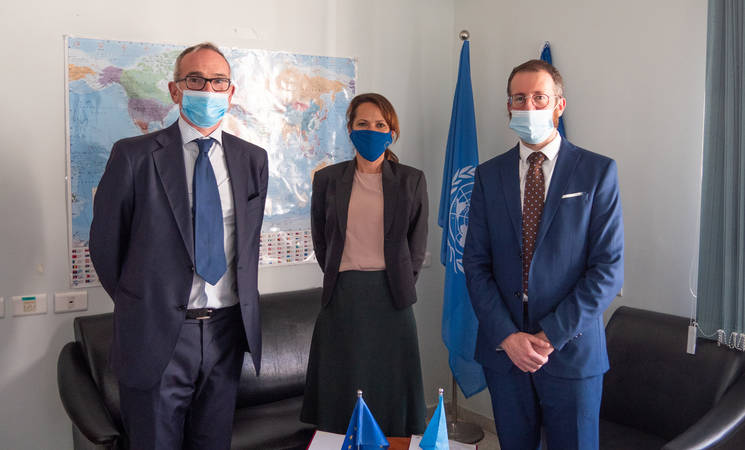 The European Union (EU) has signed an additional contribution of EUR 4.6 million to the 2020 Programme Budget of the United Nations Relief and Works Agency for Palestine Refugees in the Near East (UNRWA) to help address the needs of Palestine refugees during the COVID-19 pandemic through its health and relief programmes.

The announcement was made during a virtual meeting on 11 November between UNRWA Commissioner-General, Philippe Lazzarini, and the EU Commissioner for Neighbourhood and Enlargement, Olivér Várhelyi. This contribution comes in addition to the disbursement earlier this year of EUR 82 million to the UNRWA Programme Budget.

The UNRWA Commissioner-General expressed his deep appreciation for the continued EU trust and support: “I am very grateful for the European Union’s partnership with UNRWA and commitment towards Palestine refugees. This additional contribution is highly valued at a time when the Agency is facing an unprecedented financial crisis, exacerbated by the Covid-19 pandemic”.

The European Union Representative in Jerusalem, Sven Kühn von Burgsdorff, said “I’m very pleased that we could pay this additional allocation still this year. 2020 has been a very difficult year for Palestine refugees, who are not only badly affected by the COVID-19 pandemic and UNRWA’s serious financial crisis but also political tensions and the economic downturn in Palestine. This support will help address the much needed services for Palestinians in refugee camps, and notably in the health sector. UNRWA’s work remains crucial for all Palestinian refugees and the viability of the two-state solution, as well as for the stability and security of the region.”

The partnership between the European Union and UNRWA – which will next year mark its 50th anniversary - has evolved with the EU and its Member States becoming the largest multilateral provider of international assistance to Palestine refugees. This steadfast support has enabled UNRWA to provide frontline services to Palestine refugees across the Middle East, in the absence of a just and lasting solution to the plight of Palestine refugees.

Since 1971, the European Union and UNRWA have maintained a strategic partnership governed by the shared objective to support the human development, humanitarian and protection needs of Palestine refugees and promote stability in the Middle East. Today, the European Union is the largest multilateral provider of international assistance to Palestine refugees. This reliable and predictable support from the European Union enables UNRWA to provide core services to more than 5.7 million Palestine refugees in Jordan, Syria, Lebanon, the West Bank and Gaza, including quality education for roughly half a million children and primary health care for more than 3.5 million patients. Collectively, the EU and its Member States are also among the largest contributors to the Agency’s humanitarian emergency appeals and projects in response to various crises and specific needs across the region. The partnership between the European Union and UNRWA has allowed millions of Palestine refugees to be better educated, live healthier lives, access employment opportunities and improve their living conditions, thus contributing to the development of the entire region.