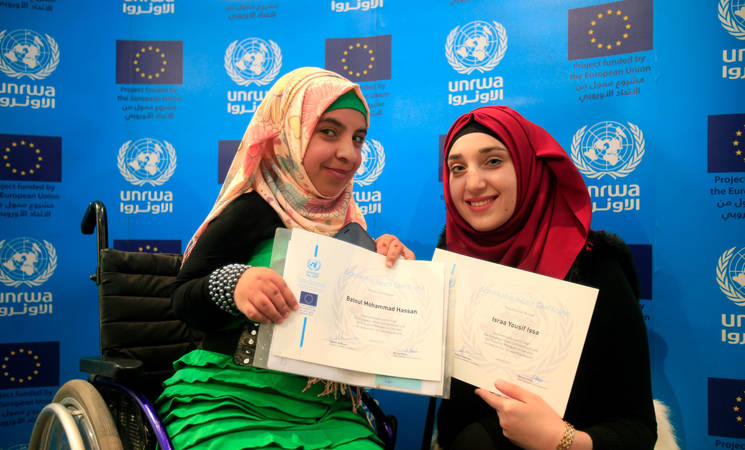 Earlier today, the United Nations Relief and Works Agency for Palestine Refugees in the Near East (UNRWA) hosted a ceremony at the Dar El-Nimer for Arts and Culture in Beirut to honour 112 young Palestine refugee graduates and awardees of university scholarships funded by the European Union (EU) in Lebanon.

The ceremony was attended by the Head of the Cooperation Section from the Delegation of the European Union to Lebanon, Dr. Alexis Loeber; the Senior Counsellor at the Embassy of Palestine to Lebanon, Maher Moshail; the Communications Expert of the Lebanese-Palestinian Dialogue Committee, Iman Chams; and the UNRWA Deputy Director of Programmes in Lebanon, Gwyn Lewis; in addition to the UNRWA Scholarship Advisory Committee, UNRWA senior staff, representatives of partner Lebanese universities and students.

Since 2005, the European Union has contributed approximately EUR 12.5 million to support more than 600 beneficiaries through the UNRWA Scholarships Programme. Currently, only 6.2 per cent of Palestine refugees residing in Lebanon hold university degrees. The EU-funded scholarships help enable young Palestine refugees in Lebanon to attend university and cover a wide range of disciplines across engineering, sciences, social and economic sciences, and liberal arts.

Loeber said: “The EU is providing scholarships to Palestine refugees to improve their skills and employability opportunities. They are an example of hard work and motivation. They can greatly contribute to the social and economic development of the region. I invite other donors to support the UNRWA Scholarships Programme.”

Representing UNRWA, Ms. Lewis said, “UNRWA appreciates the significant contribution of the EU to scholarships for young Palestine refugees in Lebanon and for our continued partnership and cooperation.”

Congratulating the students and their families, Mr. Moshail said: “Despite the socioeconomic conditions faced by Palestinians in Lebanon, we remain certain of our abilities and hold on to education and hard work to make the dream of our people to return come true and preserve the right to self-determination.”

Ms. Chams addressed the students: “The well-deserved scholarships you received today come with a huge responsibility towards your community and the Palestinian cause. You demonstrated that you are resilient citizens who hold on to their rights. This makes you an example in the eyes of young Palestinians. Awarding these scholarships shows that education, books and a positive mindset will help you pave the road to return back to Palestine.”

Palestine refugee scholarship awardee Hoda Bhar, currently majoring in Mechanical Engineering at the Lebanese American University, noted: “Palestine refugees in Lebanon face restrictions in every aspect of their lives. I was lucky to have been offered a scholarship to continue my university education; I chose a specialization not traditionally associated with females in our community. I can demonstrate that girls are able to succeed and help their families and their community. I take this chance to thank the EU for their support and their positive impact on the lives of Palestine refugees.”

Expressing his gratitude to the European Union and the UNRWA Scholarships Programme for granting him this life-changing full university scholarship, Ali Basheer, a graduate from the Beirut Arab University in Computer Communications Engineering, said: “This scholarship made me closer to my career goals and solidified my belief that hard work will allow me to reach my goals.”

The ceremony concluded with the awarding of 38 new university scholarships and certificates of achievement to 73 graduates, made possible through the ‘European Union Scholarship Fund for Palestine Refugees in Lebanon.’

"I am determined to help students to be outstanding"
The Government of the People’s Republic of China provides US$ 1 million to Support Education for Palestine Refugee Children in the West Bank
Statement on Official Exam Results of UNRWA Students in Lebanon
EU Confirms EUR 97 Million Contribution to UNRWA for 2022
syria: unrwa - progress highlights of emergency appeal january-june 2021
Socio-economic Survey on Palestine Refugees from Syria living in Lebanon
syria regional crisis emergency appeal 2021