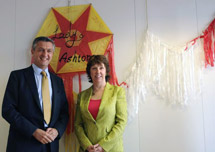 Catherine Ashton, High Representative for Foreign Affairs and Security Policy/Vice-President of the European Commission, and Štefan Füle, Commissioner for Enlargement and Neighbourhood Policy signed today in Brussels a joint declaration on EU support to the UN Relief and Works Agency for Palestine Refugees, UNRWA, in the period 2011-2013, with Commissioner-General of UNRWA Filippo Grandi. At the same time they also signed two contribution agreements for a total of EUR €45 million.

“UNRWA is a key partner organisation for the European Union in the Middle East. The principal objective of the EU’s support to Palestine refugees is to ensure that their essential humanitarian and development needs are met until there is a just, fair and agreed solution to the refugee question. In the meantime it is essential that UNRWA is able to maintain the level of the basic services it provides," said Catherine Ashton.

"The EU understands the major problems UNRWA is facing in obtaining the funds necessary to provide the most basic vital services to the Palestinian refugee population. In recognition of the excellent work carried out by UNRWA we have made a significant effort to increase our contribution to their core budget this year," said Commissioner Füle.

On behalf of Palestine refugees Filippo Grandi expressed gratitude to the EU for its renewed multi-year commitment to Palestine refugees and UNRWA, and for its contribution this year, which is particularly important at a time of significant changes in the region.

Through the signature of multi-year joint declarations with UNRWA, the EU gives an indication of its support to UNRWA’s General Fund, thus underpinning UNRWA’s ability to provide essential core services to Palestine refugees. The EU’s indicative contribution to UNRWA‘s General Fund in 2011-2013 would be around EUR €80 million a year, subject to budgetary allocations.

The first of the two contribution agreements signed today, for EUR €40 million, represents a further contribution to UNRWA‘s General Fund on top of a contribution agreement for the same amount signed earlier this year. The second, for an amount of EUR €5 million, is specifically dedicated to food security and is designed to enable the organisation to provide nutrition for the poorest and most vulnerable refugees.

The EU and its Member States are the biggest donors to UNRWA. Together with humanitarian aid and support from the Instrument for Stability, the EU contribution for 2011 now stands at EUR €125 million. Indeed, between 2000 and 2010 the EU provided more than EUR €1.2 billion in support to the Agency.