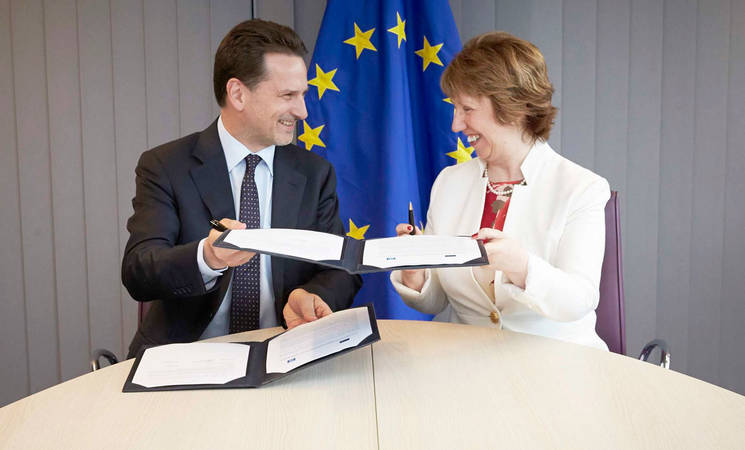 Catherine Ashton, High Representative of the Union for Foreign Affairs and Security Policy/Vice-President of the European Commission, and Štefan Füle, Commissioner for Enlargement and Neighbourhood Policy, signed today a joint declaration on EU support for the UN Relief and Works Agency for Palestine Refugees (UNRWA) for the period 2014-2016, with UNRWA Commissioner-General Pierre Krähenbühl.  Under the agreement, the EU contribution to the UNRWA General Fund for core services in 2014-2016 will amount to some EUR 246 million (US$ 335 million).

Pierre Krähenbühl expressed gratitude to the EU for its renewed multi-year commitment. “The EU remains a steadfast partner for Palestine refugees amid the uncertainty of the Middle East right now”, said Mr. Krähenbühl, “and this three-year agreement offers much needed predictability. Allow me to add that this contribution is important because there is an increasing recognition among European audiences that international assistance to Palestine refugees is being accompanied by the promotion of rights, not just to high standards of human development, but also to a just and lasting resolution of their plight.”

The EU contribution to the UNRWA General Fund will allow the Agency to provide essential education, health, relief and social services to some of the most disadvantaged communities in the Middle East.

“The EU's continuing support to UNRWA is a key element in our strategy to promote stability in the Middle East and facilitate the parties' quest for peace. It also contributes to securing access to basic social services, reducing poverty and improving refugees' living standards. For over 42 years, the EU has remained committed to supporting UNRWA", said High Representative Ashton.

EU support brings daily improvements in the lives of millions Palestine refugees, especially through the education of half a million children in Lebanon, Syria, Jordan, West Bank including East-Jerusalem, and the Gaza Strip. In addition, thousands of patients visit the 138 UNRWA clinics each day.

“UNRWA is implementing its humanitarian, developmental and protection programmes against a backdrop of extraordinary operational challenges, deriving from the conflict in Syria which has had humanitarian implications in Jordan and Lebanon, the Gaza blockade and the Israeli occupation of the West Bank, including East Jerusalem. In recognition of the excellent work carried out by UNRWA and despite the EU budgetary distress, we have increased our contribution to UNRWA core budget”, said Commissioner Füle.

Since 1971, the EU has been providing reliable and predictable support to Palestine refugees through the UNRWA regular budget, special projects and emergency appeals. Between 2007 and 2013, the EU provided more than EUR 958 million (US$ 1.3 billion) in support to the Agency. Fifty-three per cent of the Agency’s budget in 2013 came from European member states and institutions.