Finland Sign a Multiyear Agreement in support of Palestine Refugees 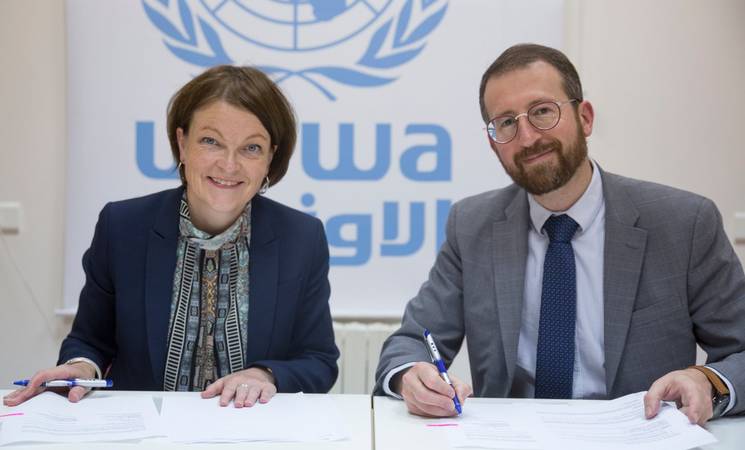 The Government of Finland and the United Nations Relief and Works Agency for Palestine Refugees in the Near East (UNRWA) signed a multiyear agreement in renewed support of Palestine refugees across the Agency’s five fields of operation. This non-earmarked contribution to the UNRWA programme budget amounts to a total of EUR 20 million over four years through 2022 and represents a renewal of the existing multiyear agreement between Finland and the Agency.

In attendance to formalize the agreement were Her Excellency Anna-Kaisa Heikkinen, Ambassador and Head of the Finnish Representative Office in the occupied Palestinian territories (oPt) and the Chief of the UNRWA Donor Relations Division, Mr. Marc Lassouaoui.

Ms. Heikkinen noted Finland was a longstanding supporter of UNRWA and added: “The UNRWA contribution to human development and humanitarian services in the West Bank, Gaza, Jordan, Lebanon and Syria is absolutely crucial. This goes for the more than 500.000 children and youngsters in UNRWA schools, and this goes for the more than 1 million recipients of UNRWA food aid in Gaza – and much more. We also acknowledge the very important role of the Agency’s services in supporting stability in the region.”

Mr. Lassouaoui praised Finland for the contribution and noted: “I express deep gratitude for the long steadfast partnership shown to UNRWA by the Government of Finland. Last year was one of the most fiscally threatening periods the Agency has faced in its history. This multiyear contribution provides vital and reliable funding in a time of great instability. It also supports the Agency in the achievement of the Resource Mobilization Strategy (RMS) objectives of sustainable and predictable funding to the Agency.”