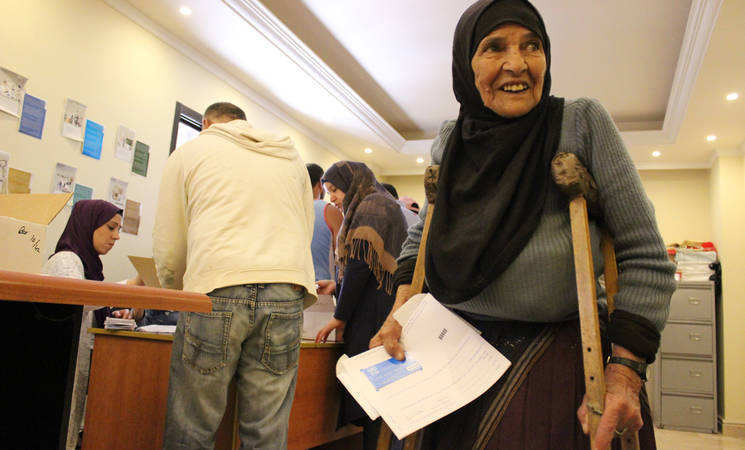 The Government of France contributed EUR 500,000 in support of the United Nations Relief and Works Agency for Palestine Refugees in the Near East (UNRWA) Social Safety Net Programme (SSNP). The Social Safety Net Programme (SSNP) was created in light of the wide exposure of Palestine refugees in Lebanon to poverty and food insecurity. Created in 2003, the Agency’s SSNP programme has served more than 292,000 Palestine refugees from over 70,000 families. This aid includes the provision of basic food commodities, as well as supplemental cash assistance.

In its current form, the the Agency’s relief and services SSNP combines a number of services such as cash subsidies, non-food items and food aid. These provisions prevent individuals deemed as poor from falling into abject poverty. Aid subsidies are provided on a quarterly basis to more than 61,700 of the most vulnerable Palestine refugees in Lebanon.

This generous new contribution from the Government of France will enable support for a total of 51,008 Palestine refugees in Lebanon in the first quarter of 2019. This represents over 80 per cent of eligible Palestine refugee SSNP beneficiaries.

The Director of UNRWA Affairs in Lebanon, Claudio Cordone said: “I express sincere thanks and appreciation to the Government of France for this generous donation, which once again reaffirms their commitment and support to the most vulnerable Palestine refugees in Lebanon. This contribution will help those in greatest need of assistance and is also a much appreciated symbol of solidarity and support from France.”

On behalf of the Government of France, the French Embassy in Beirut commented: “The UNRWA mission is vital to Palestinian refugees in Lebanon and across the Middle East. To help the Agency pursue its mandate, France has substantially increased its contribution to the UNRWA budget in light of the major financial challenges it is facing.”

France has been a long time donor to UNRWA, contributing annually to its core budget. In Lebanon, France has strongly supported the reconstruction of Nahr el Bared refugee camp in the wake of its massive destruction in 2013. In addition to this support, the Government of France is currently funding several French education projects in UNRWA schools across Lebanon through the UNRWA education programme. This includes the construction of the first UNRWA first trilingual school in Saida, southern Lebanon.