Home » Newsroom » Press Releases » With funds from the Kingdom of Saudi Arabia, UNDP and UNRWA sign agreement to support house rehabilitation in Gaza
Back to Newsroom

With funds from the Kingdom of Saudi Arabia, UNDP and UNRWA sign agreement to support house rehabilitation in Gaza 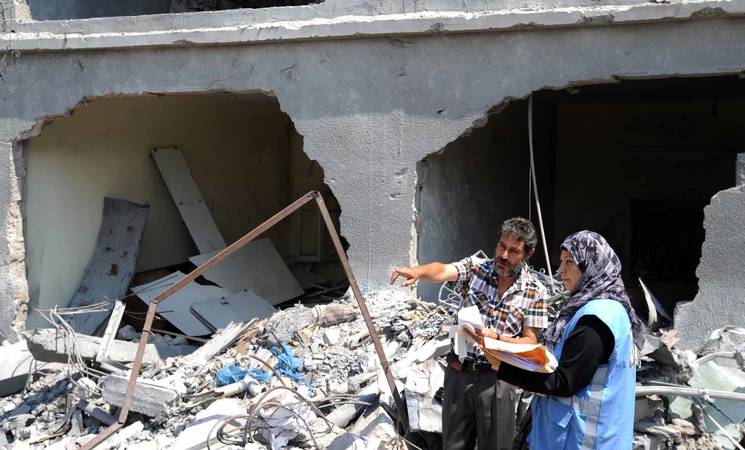 As part of their continuous efforts to support the Palestinian people, the United Nations Relief and Works Agency for Palestine Refugees in the Near East (UNRWA) and the United Nations Development Programme (UNDP) signed a memorandum of understanding for the amount of US$ 31.8 million from the Saudi Fund for Development (SFD). The generous donation will cover house rehabilitation works in the Gaza Strip. Bo Schack, Director of UNRWA Operations in Gaza, and Roberto Valent, UNDP Special Representative of the Administrator, attended the ceremony, which took place at UNRWA premises in Gaza on 15 March 2016.

H.E. Mofeed al-Hasayneh, the Minister of Public Works and Housing, thanked the Kingdom of Saudi Arabia and its people and the Saudi Fund for Development for their generous support to the Palestinian people and Gaza specifically. “This contribution comes at a critical time for the Gaza population,” he said. “We, at the Ministry, will make all possible efforts for the reconstruction of what was destroyed during the recent war and strengthen the steadfastness of the Palestinian people in the West Bank, Gaza Strip and Jerusalem.”

The project, funded by the Government of Saudi Arabia through the Saudi Fund for Development, will include the rehabilitation of more than 5,000 houses for Palestinian non-refugees affected by the 2014 hostilities in the Gaza Strip, in addition to maintenance, furnishing and equipping works for three schools, namely Rosary Sisters, Holy Family and the Greek Orthodox Patriarchate School.

UNRWA will administer the grant and be involved in the monitoring of the project, advising on construction based on its vast experience in the Gaza Strip.

“The partnership that UNRWA has developed with the Saudi Fund for Development through important construction projects for Palestine refugees in the Gaza Strip is further demonstrated through its trust in the Agency, working with UNDP, on another shelter initiative enabled by this generous contribution. Further support from SFD to Palestinians in the Gaza Strip is another positive step in the recovery efforts for all families affected by the 2014 conflict,” said Bo Schack, Director of UNRWA Operations in Gaza.

As part of the agreement, UNDP will make available its technical resources to implement the project activities. The self-help modality will be used during the project, whereby families will be provided with support to rebuild their homes and indirectly improve their livelihoods. The programme will prioritize female-headed households and will take into consideration family size and the current socioeconomic status of the targeted population.

“The shelter and education needs in Gaza are enormous. This generous contribution from the Saudi Fund for Development will support the Palestinian people in Gaza restore their livelihoods, have access to education and sustain a living. This agreement is another example of the joint efforts made by UNDP and UNRWA to support the recovery process and resilience of the Gaza population,” said Roberto Valent, UNDP Special Representative of the Administrator.

The 51-day conflict in 2014 resulted in the destruction of over 18,000 housing units, leaving approximately 100,000 people homeless. UNDP, in cooperation with the Ministry of Public Works and Housing and the Palestinian Contractors Union, conducted a damage assessment targeting the non-refugee population. The results of the assessment indicate that 31,297 non-refugee housing units were damaged. Moreover, 3,452 housing units sustained total damage, while 1,509 were severely damaged and 26,336 were partially damaged. UNRWA conducted the same assessment among the refugee population. The UNRWA shelter assessment confirmed 142,071 Palestine refugee houses as impacted during the 2014 conflict; 9,117 of them were considered totally destroyed, and 5,417 shelters suffered severe, 3,700 major and 123,837 minor damages.

UNDP partners with people at all levels of society to help build nations that can withstand crisis, and drive and sustain the kind of growth that improves the quality of life for everyone. On the ground in more than 170 countries and territories, we offer global perspective and local insight to help empower lives and build resilient nations. For more information on UNDP’s work in the occupied Palestinian territory visit www.ps.undp.org.