Home » Newsroom » News Releases » Gaza in 2020: A liveable place?
Back to Newsroom 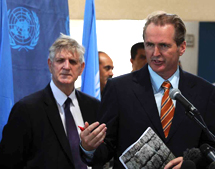 Without remedial action now, Gaza‘s problems in water and electricity, education and health will only get worse over the coming years, the top United Nations official for humanitarian and development aid in the occupied Palestinian territory, Maxwell Gaylard, warned today. "Gaza will have half a million more people by 2020 while its economy will grow only slowly. In consequence, the people of Gaza will have an even harder time getting enough drinking water and electricity, or sending their children to school."

Mr. Gaylard, together with Jean Gough of UNICEF and Robert Turner of the United Nations Relief and Works Agency for Palestine Refugees (UNRWA), launched a new report of the United Nations that summarises trends in Gaza and forecasts for the year 2020. The report says that the population of the Gaza Strip will increase from 1.6 million people today to 2.1 million people in 2020, resulting in a density of more than 5,800 people per square kilometre. Infrastructure in electricity, water and sanitation, municipal and social services are not keeping pace with the needs of the growing population.

Gaza‘s economy is expected to grow modestly and people will likely still be worse off in 2015 compared to the mid-1990s, despite fast economic growth last year. Ms. Gough said that demand for drinking water was projected to increase by 60 per cent while damage to the aquifer, the major water source, would become irreversible without remedial action now. Mr. Turner added that more than 440 additional schools, 800 hospital beds and more than 1,000 doctors would be needed by 2020.

The challenges facing Gaza are even harder to deal with given the difficult political situation, including the closure of the Gaza Strip, violent conflict, and the pressing need for Palestinian reconciliation.

Gaza is an ancient centre of habitation that has survived for 4,000 years, at various times in the face of marginalisation and destruction. Today it represents an essentially urban economy, isolated and kept alive through external funding, the illegal tunnel economy, and the ingenuity and persistence of its people.

"An urban area cannot survive without being connected", said Mr. Gaylard, who added that a return to economic progress and prosperity could only materialise through trade, communication and contact with the world beyond Gaza.