Gaza kids the best in the world – hands down 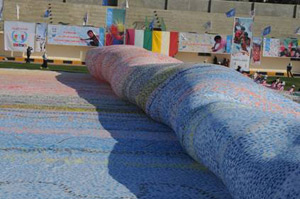 Over 5,000 children attending UNRWA Summer Games in the Gaza Strip have created the largest-ever handprint painting. At a stadium in Khan Younis, southern Gaza, some 1,500 children gathered to unveil the canvas that covered 5,922.2 square metres, smashing the previous record by over a thousand square metres.

“I had no doubt that the children of Gaza would succeed, as they always do when given the chance”, said Christer Nordahl, UNRWA’s acting Director of Operations in Gaza.

“I am delighted to tell you that included in the world record today were many kids with special educational needs. They too deserve to be number one at the top of the world”.

Fourteen-year-old Fatma Maqusi said: “I can’t walk, but when I share the world record with the other kids, I feel like my drawings can walk - like I can walk.”
Her fellow record-breaker Ensheerah El Shwasi, 14, said: "I‘m happy because I always stay at home and because of the Summer Games I am now able to go out. I send my message to the United Nations, that we need camps every year.”

Six-year-old Heba Abu Amra from Rafah, said: “We had fun today. We played so much today! We need to live. I drew my hand in the fabric and when I put my hand there, I felt like I reached the world.”

Speaking at the event, UNRWA Spokesman Chris Gunness highlighted the problems of the Israeli blockade.

“The mistreatment of children is an offence to the humanity of all, breaking many taboos. The blockade subjects three quarters of a million children to an illegal collective punishment, rendering their lives unbearable.

“It must end, and there must be full transparency and accountability for what the ICRC has called a ‘clear breach of international law’”.

For daily updates of photos, videos and stories on UNRWA and the Summer Games, view our Summer Games page or join us on Facebook