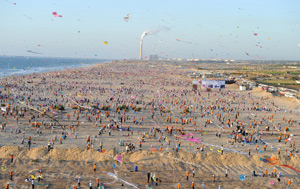 Chris Gunness, UNRWA spokesman, said: “At ten minutes past midnight last night, ten men attacked and vandalised the Summer Games facility in north-west Gaza.” Gunness condemned the incident as “an attack on the children of Gaza as much as on a neutral United Nations Agency”, and he called “on the authorities in Gaza to investigate and bring those responsible to justice. He said the United Nations was unbowed and unintimidated and stood by the children and people of Gaza”.

In an epic event on the beach in northern Gaza, the unintimidated children reclaimed the record they set at last year’s Summer Games, which was broken in April this year by a Chinese kite association flying 10,465 kites simultaneously.

“Taking on the might of China is a daunting feat for the children of Gaza,” said UNRWA acting director in Gaza, Christer Nordahl, “but they have risen brilliantly to the challenge as they have done three times already this year.”

“Thanks for Summer Games”

"We‘re very happy we broke the record," 14-year-old Nayeema al-Maden told ABC news. "When they do the next Summer Games, I‘ll be involved and we‘ll break another record."

"They take care of us so professionally, our hopes grow," said al-Maden. "We, thank, thank, thank UNRWA for the Summer Games."

"We brought happiness to our country by breaking the world record," said record-breaker Nadia el Haddad, 13. "Today because we broke the world record I feel like I have rights and that I’m like everyone else in the world.”

Eleven-year-old Abdullah Musleh said: “I’m happy when I’m flying the kites. We are the best!”

Another kite-flyer, 11-year-old Rawia Abd el Dain, said: “I made my kite the Palestinian flag and when I fly it I feel like I’m raising my country and my flag up, up in the sky.”

“It was nothing short of miraculous," said Gunness. “The tiny “David” of Gaza has overcome the mighty “Goliath” of China; even more astonishing that the children of Gaza achieved this under the punishing, illegal blockade. Three-quarters of a million children are being collectively punished and there must be transparency and accountability to end this affront to our humanity. The kites will provide another iconic reminder of the beauty and potential of these children, despite the injustices they face.”

The Games give 250,000 children across Gaza a much-needed respite from the difficulties of their daily lives – offering them a safe place to swim, play and make new friends.

Six weeks of fun and laughter

To see all the action from the last six weeks of Summer Games, join us on Facebook or visit our Summer Games section.