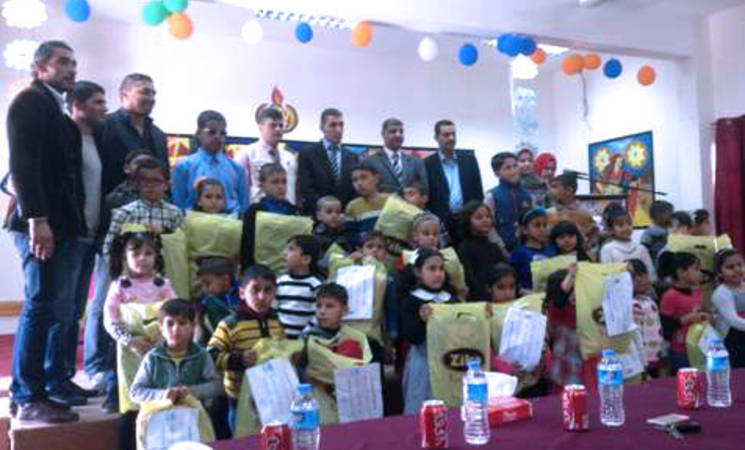 To commemorate Arab Orphans Day, on 5 April UNRWA has distributed clothes and school bags to dozens of Palestine refugee orphans all across Gaza. While the clothes were donated by the Spanish non-profit organisation Council of Orio – worth EUR 1,370 (approximately US$ 1,500) - and reached 76 children, the school bags are part of a US$24,582 financial commitment made by the United Arab Emirates (UAE) Red Crescent society in 2014. The bags are distributed to 2,520 orphan children from grades one to ten, across the Gaza Strip.

“The most important development of our orphan’s programme is the transition from the sole provision of financial sponsorship to the delivery of full integration services for the orphans in their community. The donations from the Council of Orio and the UAE Red Crescent are positive and important steps in this direction,” said Mr. Nasser Al Khaldi, the deputy chief of the Agency’s Relief and Social Service Programme (RSSP) who attended a celebration on Arab Orphan’s Day. The ceremony was held in the UNRWA Rehabilitation Centre for the Visually Impaired in Gaza City, where some of the children and their mothers* were present to receive the new belongings. Today, UNRWA offers a comprehensive protection programme for the children and their mothers and provides a wide range of services such as awareness sessions on the legal rights of orphans, psychological support, academic consultation and career advice as well as recreational activities. The UNRWA orphan’s project started in 2008 – when the Agency with the support of the UAE Red Crescent provided financial assistance to 350 children and 100 of poor families.

Due to the frequent armed conflicts, the number of orphans in the Strip has steadily increased. According to a recent survey conducted by UNRWA RSSP, the summer 2014 conflict alone left an additional 1,140 children in Gaza as orphans. Today, the UNRWA orphan project supports over 4,600 children and 300 poor families.

* In Gaza a child is considered an orphan when without a father and less than 18 years old.