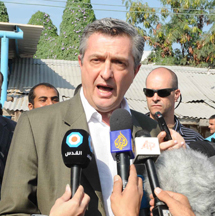 UNRWA Commissioner-General Filippo Grandi visited Gaza today to see firsthand the immense destruction taking place and to recognise UNRWA staff’s dedicated work despite the violence. Mr. Grandi met refugees, and he also spoke to staff at Jabalia distribution centre and commented on how impressed he was with their commitment. The distribution centre was badly damaged in the airstrikes, but was subsequently repaired by staff to enable food distributions to thousands of refugees.

Mr. Grandi emphasised that the immediate issue is to achieve a cease-fire, and he called for all to support the efforts of the Secretary-General in this regard. Mr. Grandi also stressed that we should not forget the underlying issues. For years Gazans have been living under a blockade that restricts their movement and exports, and has decimated the economy. “The blockade is affecting their daily lives and must be solved.”

For the seventh consecutive day, the Israeli military operation has spread fear among the civilians of Gaza. Massive Israeli Air Force (IAF) strikes, heavy tank and Israeli navy fire, have been ongoing during the past 24 hours. The situation was calmer for a few hours during the late morning, but attacks have resumed intensively in the early afternoon. Very violent explosions have been heard throughout the Gaza Strip. The number of civilian victims continues to rise.

The population lives in constant fear; there is no safe space remaining in Gaza, as the targeting of residential buildings by the IAF continues. Intensive tank fire in the border areas, creating panic among the population, caused increased civilian displacement.

Over 50 per cent of the population in Gaza is below 18 years of age. These are children who have been constantly exposed to violence. The additional severe military escalation that is currently ongoing will only add to their already-existing psychological trauma.

No ground operation has been launched. The UN and the international community are extremely concerned and UN Secretary General Ban Ki-moon was quoted in Cairo today saying: "Immediate steps are needed by all to avoid a further escalation, including a ground operation which will only result in further tragedy." The UNRWA Commissioner-General, during his visit to Gaza today, said: "What usually triggers displacement is a ground operation; a ground offensive. That‘s why we really hope that a ground offensive will not happen, because – among many other things – it will also cause a lot of humanitarian problems."

Heavy rocket firing towards the Israeli territory has been ongoing, including two rockets that were fired into the suburbs of Jerusalem this afternoon. It is the second time since the beginning of the Israeli military operation that rockets landed close to Jerusalem.

The situation in the streets remained unchanged; there are few movements and people only go out when absolutely necessary. Some food stores, fruit and vegetable markets, and pharmacies opened again today. Shortages in basic items are to be expected in the coming days should the situation remain unchanged or deteriorate.

Intensive IAF shelling of the tunnel area has been ongoing and it is extremely risky to be in that area. However, fuel kept being pumped in, but in lower amounts and with interruptions.

The number of displaced families has further increased. UNRWA has opened one school in Gaza City, where approximately 700 refugees have taken shelter.

Displacement of 30 families (170 individuals) from the Beit Hanoun area and 50 to 60 families from the Jabalia area was also reported. These families have reportedly been hosted by relatives or friends in other less-insecure locations.

UNRWA is currently registering and assessing the needs of displaced families in co-ordination and co-operation with the International Committee of the Red Cross and the Norwegian Refugee Council. UNRWA has started to distribute non-food items (NFIs) such as mattresses and blankets and will continue to assist refugee families while other actors assist non-refugee families. Funding is urgently needed to cover the distribution of emergency food that may be needed due to the current escalation.

The Agency received a request from the Ministry of Social Affairs today to distribute NFIs to approximately 280 families in Northern Gaza – Khan Younis and Rafah. An assessment of these families is also being conducted to review the appropriateness of potential assistance.

Urgent action has been taken to donate medical supplies to the Gaza Ministry of Health (MoH) from the current UNRWA stock, to support the current operations of the MoH in caring for the injured. The Agency will require USD 400,000 to subsequently replenish its own stocks. UNRWA is also currently reviewing its database for job creation programme staff to support health-care professionals in hospitals dealing with the surge in patients as a result of the ongoing violence.

As of yesterday, 19 out of 21 UNRWA health centres continued to provide a range of services to the population in Gaza. Two health centres remained closed due to their close proximity to the border. Today more than 700 health staff voluntarily reported to work in the nearest health centres to their home, treating almost 13,000 patients. The number of patients reporting to our health centres continues to be lower than usual due to the fact that most people remain at home, as it is too dangerous to move in Gaza and most of the injured visit hospitals instead of health centres.

The current security situation, the closure of the shops, and the concerns around food availability, worry the population extremely. Around 600 non-refugees and refugees who are not eligible for food assistance (according to targeting results of UNRWA’s poverty survey) have visited our distribution centres seeking assistance.

UNRWA continued to provide solid waste collection in the eight refugee camps across Gaza to mitigate any public health concerns. Yesterday alone, UNRWA sanitation workers collected 250 tons of solid waste in the eight refugee camps. UNRWA is very thankful for the dedication of its sanitation staff, who – despite the danger they are undergoing when moving inside the camps – continue to voluntarily report to work, ensuring that solid waste does not accumulate.

UNRWA is extremely proud of its staff, who – under such dangerous circumstances – are at work ensuring that services to Palestine refugees continue to be delivered. The dedication of our staff is extraordinary and a true example of humanitarian work.

No casualties with an UNRWA connection were reported.

No UNRWA installations or those with an Agency connection were reported damaged.