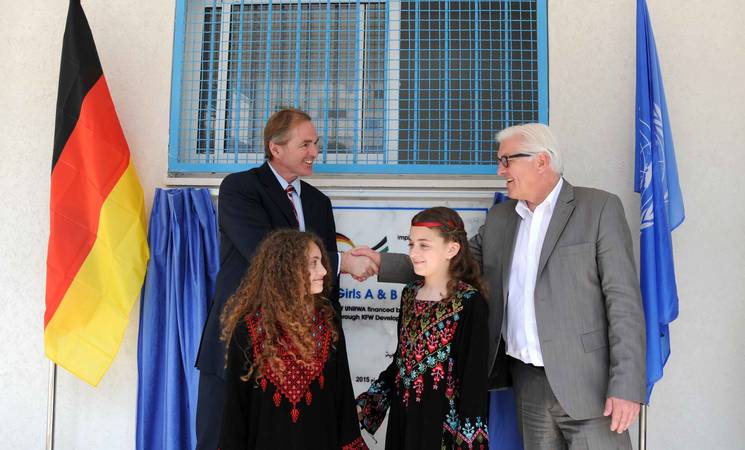 German Foreign Minister Frank-Walter Steinmeier visited Gaza on 1 June to meet with refugee families and get a first-hand impression of the current situation in the Gaza Strip.

Foreign Minister Steinmeier also met with UNRWA Director of Operations in Gaza Robert Turner. Whilst in Gaza, the Foreign Minister inaugurated a new UNRWA school that was built with Germany’s support. Asma Prep Girls A&B School, in central Gaza’s Beach refugee camp, will host 2,000 students between grades 5-7 from the beginning of the 2015-2016 school year, at the end of August.

Whilst in Gaza, the Foreign Minister also met with Palestinian fishermen in the harbour of Gaza City who are benefiting from a project funded by the German government. Both projects are implemented through KfW Development Bank.

Germany is the second-largest supporter of the UNRWA response to the humanitarian crisis resulting from the 2014 conflict in Gaza, with a total contribution of EUR 80 million (US$ 93 million) to UNRWA programmes in Gaza to date. This support allowed UNRWA to initiate its emergency shelter assistance programme and to support the most vulnerable. In 2014, Germany was the fifth-largest UNRWA donor in overall terms, with a total contribution of US$ 79 million. In 2015, Germany has so far contributed and pledged over US$ 60 million to support UNRWA work.

“We are delighted to host the Foreign Minister here today and are incredibly grateful to Germany for its ongoing commitment to Palestine refugees in Gaza, through the provision of key funding support to UNRWA,” said Mr. Turner. “Without such generosity for our ongoing and emergency programmes, we could do far less to meet the needs of an extremely vulnerable population. Nevertheless, we continue to call for a political solution to the underlying causes of the conflict and a full lifting of the blockade.”