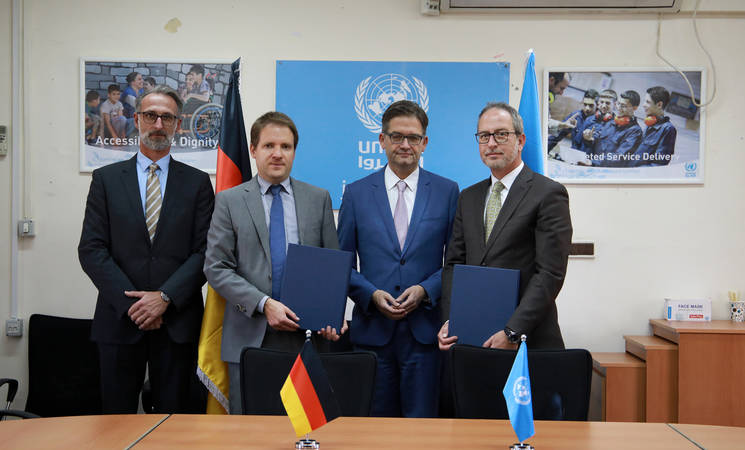 Today, the United Nations Relief and Works Agency for Palestine Refugees in the Near East (UNRWA) and the Government of Germany through KfW Development Bank signed agreements in support of Palestine refugees in Gaza and the West Bank, including East Jerusalem, amounting to a total of EUR 21 million.

The Government of Germany will provide EUR 15 million to ensure that approximately 50,000 Palestine refugee children in Gaza and 46,000 in the West Bank have continued access to learning in UNRWA schools, and that Palestine refugees have access to life-saving health care services in three Health Centres in the Gaza Strip.

Additionally, Germany will support the early recovery of Palestine refugees in Gaza affected by the latest round of hostilities through a EUR 6 million contribution, by providing financial assistance for the reconstruction of approximately 150 destroyed shelters and by supporting 50 families in meeting their urgent psycho-social relief needs.

Mr. Oliver Owcza, Head of the German Representative Office in Ramallah, welcomed these agreements as essential assistance to Palestine refugees in Gaza and the West Bank following a particularly challenging year, especially in light of the instability caused by the COVID-19 pandemic and the May 2021 hostilities. He thanked UNRWA for its work under likewise difficult conditions and added: “Supporting the provision of primary health care for people in need and of quality, inclusive education for Palestine refugee children in Gaza and the West Bank are key priorities for the Government of Germany.”

“Through this generous and timely contribution, the Government of Germany has once again demonstrated its tremendous commitment to the well-being of Palestine refugees, by supporting UNRWA in maintaining undisrupted education and health services in Gaza and the West Bank, during one of its most severe financial crises,” said Mr. Karim Amer, UNRWA Director of Partnerships. “The additional contribution to reconstruction activities in Gaza is only the latest example of Germany’s generosity towards Palestine refugees in Gaza, especially those affected by cyclical rounds of violence, and a testimony of trust towards UNRWA’s emergency operations,” he added.

In 2020, the Government of Germany was the top donor to UNRWA, having contributed more than EUR 182 million. In 2021, the Government of Germany is expected to be the second largest donor. With today’s announcements, Germany contributed EUR 32.75 million in support of the Agency’s Programme Budget and EUR 11 million to the Agency’s oPt Humanitarian Early Recovery Appeal.