Germany Contributes EUR 23.15 Million to UNRWA for Projects in Gaza 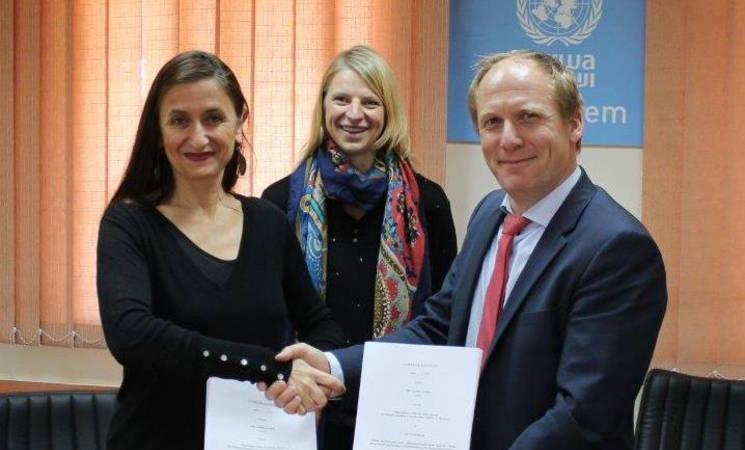 On 8 and 13 December 2017, the United Nations Relief and Works Agency for Palestine Refugees (UNRWA) signed two agreements with the German Development Bank (KfW) totaling EUR 23.15 million from the German Ministry for Economic Cooperation and Development (BMZ).

As part of the overall contribution, EUR 18.15 million will be allocated to the UNRWA reconstruction programme in Gaza, allowing the safe and dignified return of some 540 Palestine refugee families to their houses that were completely destroyed during the hostilities in the summer of 2014. Reaffirming Germany’s strong commitment to support Palestinian refugees in Gaza, this grant builds on earlier contributions in the amount of EUR 57 Million by the German Federal Government towards the UNRWA emergency shelter and reconstruction programme since 2014.

An additional EUR 5 million will be used for the construction and expansion of two UNRWA schools in the Gaza Strip which will benefit around 6,000 students. Two schools will be constructed using the completely renewed, innovative, child-friendly UNRWA school design and will significantly enhance education for thousands of children over the coming years. In total, UNRWA operates 267 schools in Gaza, providing primary education to a steadily increasing student population of now over 262,000 refugee children.

The German Representative in Ramallah, Mr. Peter Beerwerth, welcomed the additional funding: “With this substantial contribution to the UNRWA reconstruction programme in Gaza, Germany is continuing its support to Palestine refugees. 540 families will be able to rebuild their completely destroyed houses.

As education is of utmost importance to Germany, we are contributing an additional EUR 5 million to UNRWA schools in Gaza. With this German support, thousands of students will profit from an enhanced and safer learning environment,” he added.

“We highly value this generous contribution and the commitment of the Federal Republic of Germany to support the Palestine refugees in the Gaza Strip and the work of UNRWA work which will bring the response to reconstruction needs resulting from the massive destruction caused in 2014 a significant step towards completion. We are also very much appreciate the support from the BMZ and the KfW to build schools that will enable us to continue to provide quality education for Palestine refugees’ children in Gaza,” stated Mr. Matthias Schmale, Director of UNRWA Operations in Gaza.

These additional contributions further extend the significant support that the German Federal Government is rendering towards Palestine refugees in Gaza. Germany continues to support UNRWA in the fields of humanitarian assistance, employment creation, infrastructure, reconstruction and rehabilitation. The new contributions are implemented through the state-owned development bank KfW.