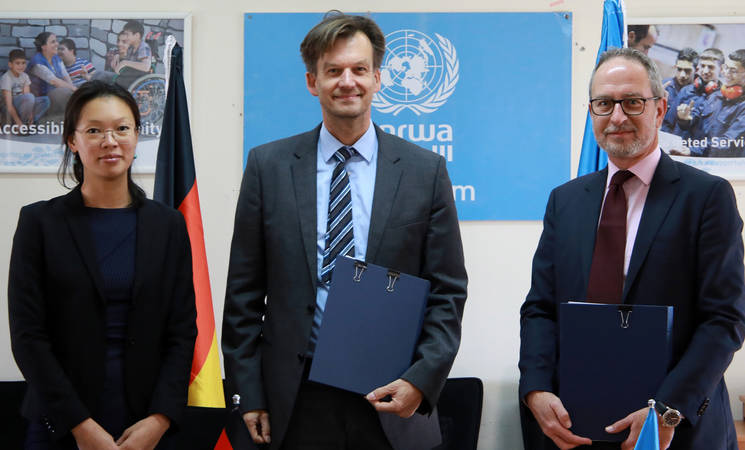 Today, the United Nations Relief and Works Agency for Palestine Refugees in the Near East (UNRWA) and the Government of Germany through KfW Development Bank signed agreements in support of Palestine refugees in Gaza and Lebanon, amounting to a total of EUR 25 million.

The additional funding will build on previous German-supported efforts in the reconstruction of the Nahr el-Bared Camp in Lebanon after its destruction as the result of clashes in 2007 and where approximately 20,900 people are still expected to return to. The EUR 10 million contribution will enable approximately 192 families to return to 269 residential units. In addition, business owners will re-open their shops in 31 newly reconstructed retail units.

In the Gaza strip, German support will provide vital sanitation support for around 244,000 Palestine refugees in seven densely populated camps who will benefit from improved environmental and living conditions as well as temporary employment. Through urgently needed rehabilitation and expansion of water, sanitation and hygiene (WASH) infrastructure, the project will contribute to improving access to safe and efficient WASH services at camp-level and help mitigate against public health risks, including the spread of diseases.

Mr. Michael Herold, Acting Head of the German Representative Office in Ramallah, reiterated Germany’s support to UNRWA and Palestine refugees: “Germany will remain a reliable partner to UNRWA and its essential work to improve the living conditions of Palestine refugees. Supporting their dignified living conditions in Gaza remains a key priority of the German Government.”

“On behalf of the Agency, I would like to express my gratitude to Germany for the generous, steadfast support over the years to UNRWA and Palestine refugees. As of today, Germany provided EUR 56 million to the reconstruction of Nahr el-Bared Camp to allow displaced families to return safely to the camp. This contribution will also address the needs of Palestine refugees in Gaza, who will have increased access to safe water, sanitation and hygiene infrastructure. The support provided over the years is proof that Palestine refugees and UNRWA can count on Germany in the most troubled times,” said Karim Amer, UNRWA Director of Partnerships.

Mr. Marc Engelhardt, Director of the KfW Middle East Department, said: “KfW and UNRWA are closely cooperating on development initiatives in the region, especially in Gaza, Lebanon and Jordan. Through this, we have realized important progress regarding the reconstruction of Nahr el-Bared Camp, and we look forward to expanding our engagement for infrastructure and service improvements in the WASH and environmental health sector in Gaza, which will especially support the most vulnerable refugees.”

In 2020, the Government of Germany was the Agency’s top-ranking donor, having contributed more than EUR 182 million. In 2021, the Government of Germany is expected to be the second largest donor to UNRWA with total contributions of around EUR 127 million to the Agency’s Programme Budget, Emergency Appeals, the oPt Humanitarian Early Recovery Appeal and projects. Germany has been a member of UNRWA Advisory Commission since 2005.