Home » Newsroom » Press Releases » Germany Contributes US$ 10.1 Million to UNRWA in Support of Palestine Refugees
Back to Newsroom

Germany Contributes US$ 10.1 Million to UNRWA in Support of Palestine Refugees 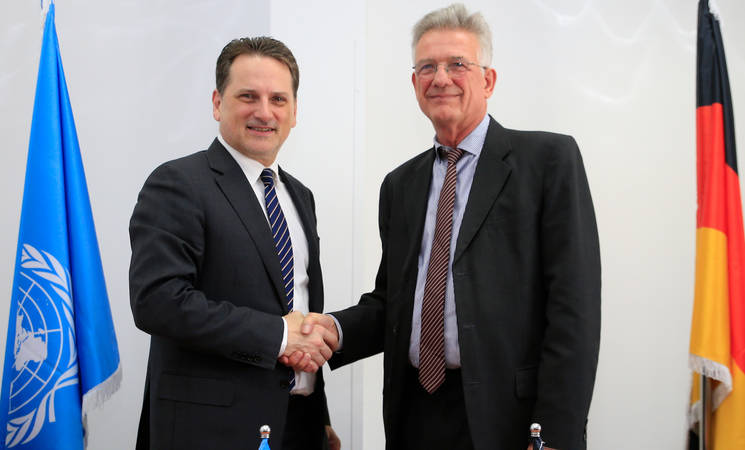 Germany’s latest contribution of US$10.1 million to the United Nations Relief and Works Agency for Palestine Refugees in the Near East (UNRWA) will help provide important assistance in the areas of education, health care, relief and social services, microfinance, infrastructure and camp improvement, and protection. In doing so, it will protect the dignity of Palestine refugees and support the realization of the Sustainable Development Goals and the 2030 Agenda.

After signing a contribution agreement with the Head of the German Representative Office in Palestine, Christian Clages, Commissioner-General Krähenbühl said that: “Germany’s contribution is both generous and timely. I am grateful for the dynamic partnership with Germany, whose financial support to the Agency is a testimony of a tremendous commitment to the well-being of Palestine refugees.”

Representative Clages underlined the importance of Germany’s financial contribution: “This contribution is a recognition by Germany of the profound role UNRWA plays not only in the delivery of basic human development and humanitarian aid services to Palestine refugees and protection of their basic human rights, but in the advancement of peace and stability in the Middle East region.”

Germany has been a member of UNRWA Advisory Commission since 2005 and has significantly raised its contribution to the Agency in recent years. In 2018, it disbursed a total of US$ 177.4 million to respond to the Agency’s financial crisis, thus becoming the second largest donor to UNRWA after the European Union.