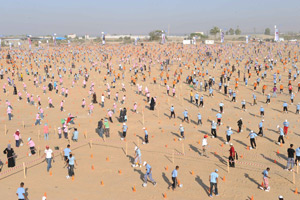 The children of Gaza today set their second Guinness World Record in as many weeks, for the largest number of footballs dribbled simultaneously. In an event organised by UNRWA as part of its 2011 Gaza Summer Games programme, 2,011 children gathered in Kherbit El-Addas, Rafah, to attempt the record breaker.

The event took place just a few miles from the Khan Younis stadium, where two weeks ago 3,500 children broke the world record for the largest number of parachute games.

“Today, I want to congratulate the children of Gaza once again for their second world record in two weeks,” said Christer Nordahl, UNRWA’s acting director of operations in Gaza.

“As we’ve seen yet again, when given the opportunity, the children of Gaza can be the best in the world.”

"Best day of the year"

Twelve-year-old Ahmed Zaqul, from Jabalia, said: "It‘s the best day of the year. We‘ve been training for one week. We are very happy and proud!"

His fellow record-breaker, Mohammed Abu El Eish, 15, said: "I feel happy and very excited! We feel like we are the best in the world."

This year’s world record achievements are nothing new for Gaza’s children. During UNRWA’s Summer Games in 2009 and again in 2010, they broke the Guinness World Records for the number of kites flown simultaneously, and the number of basketballs bounced. Not content with this success, this summer the children aim to break a total of four records.

The next challenge will be on 21 July, when children with special needs will attempt to create the largest ever handprint painting.

“The Israeli blockade of Gaza has lasted longer than some of the most notorious sieges in human history.

“Today, there is a crisis in every aspect of life in Gaza. In education, we need to build 100 new schools in three years for these children who have shown today what they can do when given the chance.

"The International Committee of the Red Cross has called the blockade ‘a collective punishment in clear violation of international humanitarian law‘ and has called on the international community ‘to ensure that repeated appeals by States and international organisations to lift the closure are finally heeded‘.

“We endorse those calls for accountability, because we need to lift the blockade and give the kids of Gaza a chance to fulfil their true potential.”

UNRWA is extremely grateful for the in-kind donation of 200 footballs from UEFA, facilitated by the United Nations Office on Sport for Development and Peace (UNOSDP).

To keep up-to-date with all the action from the Summer Games and find out the result of the remaining world-record attempts, join us on Facebook or visit our Summer Games section.