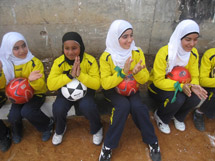 “I often felt that football was limited to boys,” said Ayda Nidal. “But UNRWA has given us the opportunity to practise football.”

The 14-year-old girl and other children living in the Jenin refugee camp are now able to play in a football field restored by UNRWA through a project funded by the German government.

Project “Kick the Ball” is a collaboration between the Free University of Berlin and the Palestinian Counselling Centre (PCC), using sports to help Palestine refugee children overcome the trauma of war and occupation. 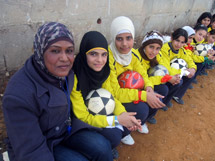 With training from the German university, eight coaches from UNRWA schools are teaching Jenin refugee students football skills that can be applied off the field – such as fair play, tolerance, and respect. 400 young people have already taken part in the after-school and weekend trainings.

“I am delighted that the children of Palestine have the opportunity to be coached by professionals, and we can witness their skills first-hand,” said UNRWA’s Dr. Muhannad Beidas. “This kind of human development work with refugees in the occupied Palestinian territory (oPt) is especially critical during these times of unrest.”

Dr. Beidas attended the launch of the rehabilitated field along with other partners in the project, including the German representative office in the oPt, the governor of Jenin, the Popular Camp Committee, and children from the refugee camp.

Addressing the needs of traumatised children

Also assisting in the project are staff from the PCC, who will provide one-on-one support to both the children who have survived conflict and the coaches who are training them.

Counsellors will help children learn how to deal with their emotions in the context of war and occupation, and will ensure that coaches can provide assistance to traumatised children.