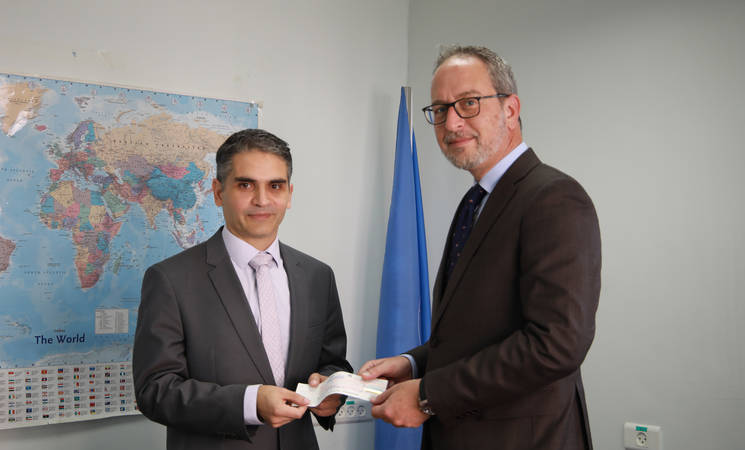 Today, the Government of Cyprus contributed EUR 100,000 to the United Nations Relief and Works Agency for Palestine Refugees in the Near East (UNRWA) in support of the Agency’s core programmes and services to Palestine refugees. The contribution was presented to UNRWA by the Representative of Cyprus to the State of Palestine Dr. Demetris Assos.

Reiterating Cyprus' continued support for UNRWA services, Dr Assos stated: “On behalf of the Government of the Republic of Cyprus, I would like to express my appreciation for the remarkable and tireless efforts carried out by UNRWA. Cyprus will continue supporting the Agency’s indispensable activities in providing vital services and humanitarian aid to Palestinian refugees. Traditionally our annual contribution to UNRWA is made through our Permanent Mission in New York, but this year we decided to make the donation here at the headquarter of UNRWA in Jerusalem in order to underscore the importance of supporting the mission of the Agency here in its actual field of operations.”

Mr. Karim Amer, UNRWA Director of Partnerships, said: “This donation comes at a very important time and we are grateful for the support of the Government of Cyprus. Funding of our core programmes and services allows the Agency to support health and education professionals, as well as provide other vital functions to millions of Palestine refugees across the Middle East. On behalf of UNRWA, I would like to thank the Government of Cyprus for its continued funding to the Agency and its backing of Palestine refugees.”

Cyprus recently joined the dozens of states that participated in the International Ministerial Conference on UNRWA in Brussels on 16 November 2021. Those in attendance extended their strong continuing support to UNRWA where several states proceeded to pledge additional financial support for the Agency to bridge its current funding shortfall. Cyprus is continuing to support Palestine refugees and with this donation has contributed almost EUR 500,000 to UNRWA since 2016.