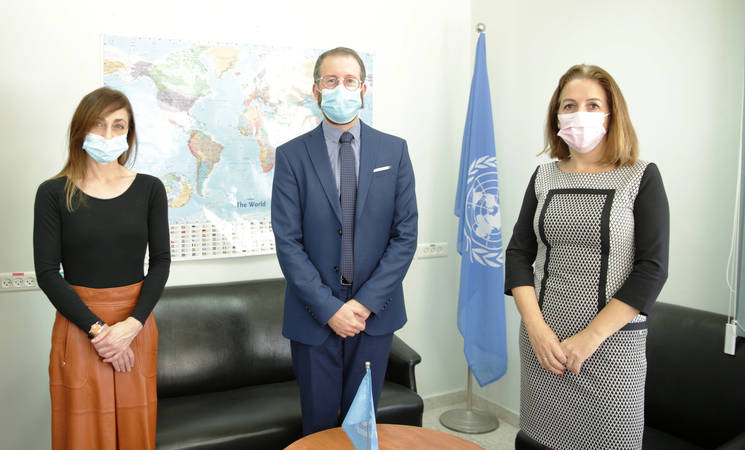 Today, the Deputy Consul, Ms. Sofia Ruiz del Árbol, and the Head of Cooperation, Ms. Eva Suárez Leonardo, of the Consulate General of Spain in Jerusalem, met with Mr. Marc Lassouaoui, the Acting Director for Partnerships of the United Nations Relief and Works Agency for Palestine Refugees in the Near East (UNRWA). At the meeting, the Spanish officials confirmed the recent announcement of an additional contribution of EUR 5 million from the Government of Spain in support of Palestine refugees, bringing Spain’s total contribution to UNRWA to approximately EUR 12 million in 2020.

This additional contribution comes at a time when UNRWA operates amidst dire financial conditions and will help UNRWA continue to deliver core services to Palestine refugees throughout the region, including education, health care and relief and social services.

Announcing their additional support for UNRWA during an extremely challenging year, Ms Ruiz del Árbol remarked that: “Spain will remain committed to Palestinian refugees and UNRWA until the achievement of a final solution that will allow Palestinians to deliver on the development goal and reduce the humanitarian needs and vulnerabilities, ensuring that any refugee has access to health and education services.”

Mr. Marc Lassouaoui, on behalf of the Agency, expressed his sincere appreciation to the Government of Spain for its continued support to the Agency: “We are deeply grateful for this generous contribution especially as Spain is facing economic difficulties of its own due to the Covid-19 pandemic. This is a strong signal that Spain is giving priority to supporting Palestine refugees. It also highlights the importance the Spanish government attaches to the stability in the Middle East region.”

The Government of Spain has been a longstanding supporter and a strategic partner of UNRWA. In 2019, Spain contributed over EUR 9 million to support the Agency’s vital services to some 5.6 million Palestine refugees across the Middle East.