Home » Newsroom » News Releases » Great March of Return: Scores of People Killed and Injured Over One Year
Back to Newsroom

Great March of Return: Scores of People Killed and Injured Over One Year 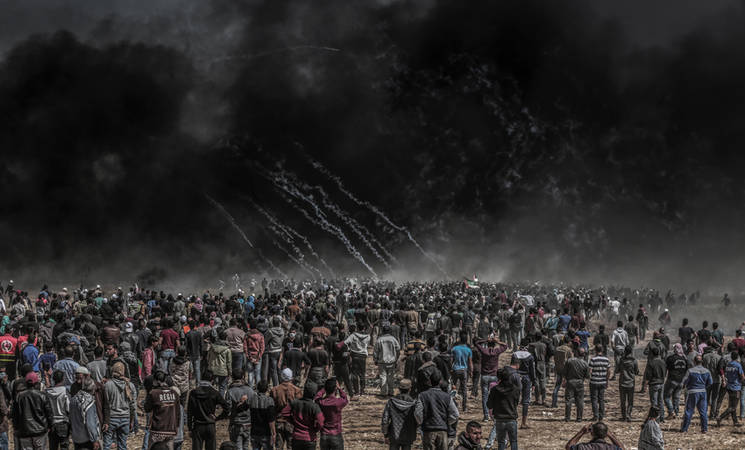 One year after the start in Gaza of demonstrations that became known as The Great March of Return (GMR),  scores of people, particularly young men, have been left dead and many others injured, as well as in need of long term medical and psychosocial assistance. According to OCHA figures, as of 22 March 2019, 195 Palestinians (including 41 children) have been killed and close to 29,000 people injured. The United Nations has expressed concerns about the excessive use of force deployed by the Israeli Security Forces (ISF) contrary to applicable standards under international law.

With information collected through its operations and testimonies of staff and beneficiaries, the United Nations Relief and Works Agency for Palestine Refugees in the Near East (UNRWA) is releasing today a report that reflects the devastating impact of the weekly demonstrations on the lives, livelihoods and health of Palestine refugees and on the Agency’s services. Moreover, the Agency is concerned about and deeply affected by the death of 13 of its students, the injury of 227 others, most of them aged between 13 and 15 years, and the likely inability of injured students to keep up with their studies, especially in cases of prolonged absences.

“Since the largely peaceful demonstrations started a year ago, not only did nearly 200 people die, but thousands of others have suffered injuries that will scar them forever,” said UNRWA Director of UNRWA Operations in Gaza, Matthias Schmale. “The tragic and unnecessary loss of lives, the inability of injured people to work or go back to school and the long-term psychological implications of this violence will affect them for many years to come, adding to their despair.”

The ongoing violence and its tragic effects have put a strain on the entire health and social system in Gaza, including the services provided by UNRWA. The toll on children has been particularly high, with twenty per cent (533) of persons treated for GMR-related injuries in UNRWA health clinics being under 18 years of age, most of them boys (95 per cent).

In addition to the physical impact, the GMR-related violence has also had a significant effect on the psychosocial well-being and mental health of Palestine refugees in Gaza, particularly for those who have witnessed the violence and for the families that have experienced casualties as a result of it.

Our 22 primary health facilities in Gaza have been providing assistance to those individuals and families affected by the weekly demonstrations but have been strained to breaking point as a result of dealing with 2729 additional patients.

“We are doing all we can to absorb the enormous pressure on our health and other facilities,” says Schmale. “However, we should remember that, although the ‘Great March of Return’ demonstrations are occurring within the context of an unprecedented humanitarian crisis in the Gaza Strip and over 12 years of an Israeli blockade, the larger context is that of a dire situation for Palestine refugees that needs a just and lasting solution.”

The full report is available here.