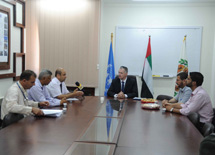 UNRWA and Human Appeal International, an Emirati NGO based in the Emirate of Ajman, have launched their first joint education project in Gaza. Under the project, nine additional classrooms will be constructed at the Al Durj Primary School in Gaza City. A ceremony held to mark the signing of the agreement between the Agency and the contractor was attended by the director of Human Appeal in Gaza, Mr. Imad Haddad, and the deputy director of UNRWA operations in Gaza, Mr. Scott Anderson.

Welcoming this contribution, Mr. Anderson said: “Providing education is one of the Agency’s most important interventions in Gaza, and we are delighted that Human Appeal International has come on board with us as a partner. These new classrooms will go a significant way in easing the strain on space in Al Durj School. UNRWA, the students, and the teachers are very grateful to Human Appeal International for its support.”

Mr. Imad Haddad, director of Human Appeal in Gaza, said: “We look forward to continuing our co-operation with UNRWA in different fields such as health, relief and social services, and especially education. This latest project builds upon our past efforts in Gaza, especially during the 2008-2009 war, and we hope to take further steps towards enhancing co-operation in the future.”

Al Durj Primary School currently educates 1900 students in two shifts. The new classrooms will help to ease the overcrowding that has been endemic in Gaza schools by providing additional learning space for some 630 students in the morning and afternoon sessions. Due to increasing need for places in UNRWA schools in Gaza, students are often crowded into classrooms with insufficient space, with three children frequently having to sit on desks designed for just two students, which has affected concentration levels and academic achievement.

UNRWA provides education to some 218,000 children in Gaza in 243 schools, many of which suffer from overcrowding and run-down premises as rapid population growth rates have increased demand on UNRWA schools. To address this, UNRWA with the support of its generous donors, has embarked on a plan to construct additional schools and classrooms across the Gaza Strip.

UNRWA is a United Nations agency established by the General Assembly in 1949 and is mandated to provide assistance and protection to a population of some 5 million registered Palestine refugees. Its mission is to help Palestine refugees in Jordan, Lebanon, Syria, West Bank and the Gaza Strip to achieve their full potential in human development, pending a just solution to their plight. UNRWA’s services encompass education, health care, relief and social services, camp infrastructure and improvement, microfinance and emergency assistance. UNRWA is funded almost entirely by voluntary contributions.