Hundreds of students from United Nations schools near Jericho have created a massive aerial image of the dove of peace in conjunction with the world-renowned artist, John Quigley. Directed by Quigley, who has created mass aerial images from large groups of people for over a quarter of a century, they gathered in the dove formation at the foot of the Mount of Temptation in Jericho, reputed to be the oldest and lowest city on earth.

"This is a mirror image of Picasso‘s famous ‘Peace Dove‘. Palestinian youth are sending the message to ‘love one another‘ and ‘love all‘ so we can find a path to peace,” said Quigley. “These kids are planting seeds of hope into the heart of the Middle East conflict. They deserve the kind of positive future we wish for all children."

The students are from schools run by the United Nations Relief and Works Agency, UNRWA, which educates half a million children across the Middle East.

“The world needs to sit up and listen to the youth of this region,” said UNRWA Commissioner-General, Filippo Grandi. “Their message of peace is essential. It is the voice of the next generation.” 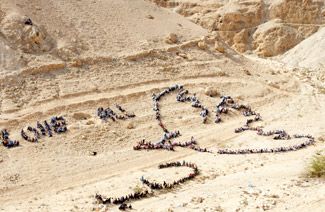 The image is being created as part of “Project Peace on Earth”, founded by Steve Robertson, which will stage a globally broadcast Musical Prayer for Peace concert from Bethlehem’s Manger Square on Christmas Day. "Our soul is defined by the music of our heart,” said Robertson. "When we listen towards that divinity and choose to express that joyful wisdom, the result is always peace."

UNRWA is grateful to the sponsors and donors of this event:

Watch a video of the event