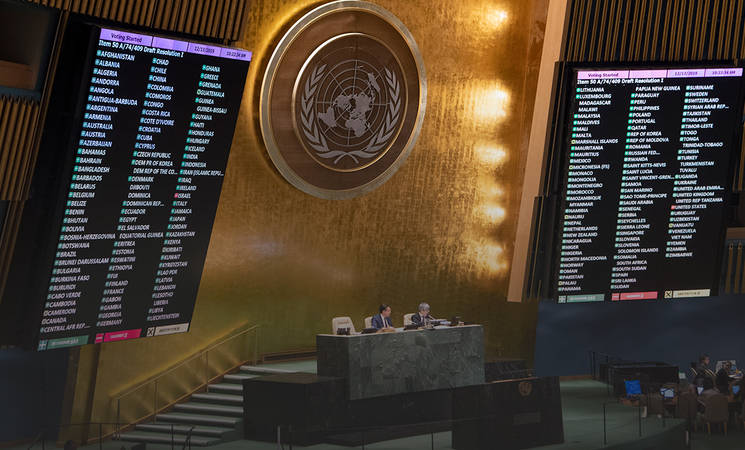 The United Nations General Assembly voted on December 13, 2019 to extend the mandate of the UN Relief and Works Agency for Palestine Refugees in the Near East (UNRWA) until 2023. The overwhelming voting in favor of the extension comes nearly a month after a similar vote took place in the Special Political and Decolonization Committee (Fourth Committee) of the United Nations General Assembly.

UNRWA was established 70 years ago and provides essential services to Palestine refugees based on a mandate given to it by the General Assembly, which is renewed every three years. UNRWA is experiencing the worst financial deficit in its 70 year history and is seeking to overcome a financial gap of nearly US $167 million before the end of the year.

“This outcome confirms the international community’s trust in the ability of UNRWA to deliver on the critical mandate of protecting and providing essential services to the millions of Palestine refugees under its care in the West Bank, including East Jerusalem, Gaza, Lebanon, Jordan and Syria until a just and lasting solution is reached,” said Acting Commissioner-General of UNRWA, Mr. Christian Saunders.

The Agency provides services in the fields of health, education, microfinance, infrastructure and camp improvement, protection and relief and social services, with over half a million girls and boys attending its 709 schools and some 8.5 million patient visits provided in 2018 alone in 22 health centers across the five fields of operations.

The vote is seen as a confirmation of the strong support that Member States have for UNRWA, the stability its services bring to millions of people across the Middle East, and its efficiency in the face of shrinking financial support, partly as a result of a decision by the Agency’s largest donor to cut its funding in 2018.

“We are extremely grateful to UN Member States for this overwhelming vote of confidence in the Agency,” said Mr. Saunders. “Now, we need them to step up their assistance and make available the necessary resources that will enable us to implement the mandate that they have given us.”