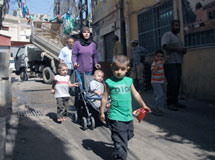 Indonesia pledged a fivefold increase in its support for the United Nations Relief and Works Agency for Palestine Refugees (UNRWA) in 2012, with a voluntary contribution of $100,000 to the UN agency.

“We are grateful for this donation from Indonesia, which will help us provide health care, education, and other vital services to Palestine refugees,” said UNRWA Commissioner-General Filippo Grandi. “At a time when solidarity with the Palestinian people is so important, Indonesia is sending an important message of support to refugees.”

The announcement was made at a pledging conference for the Agency, in the same month that the UN General Assembly called on member states to increase their support for Palestine refugees through UNRWA.