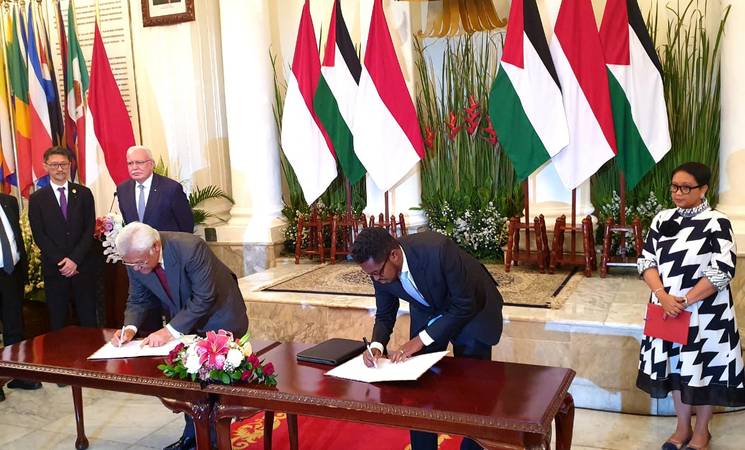 The United Nations Relief and Works Agency for Palestine Refugees in the Near East (UNRWA) has signed the first multi-year agreement with Indonesia’s national Zakat agency, BAZNAS.  The agreement marks an important partnership for the Agency in promoting its #DignityIsPriceless Campaign and narrowing the gap of its unprecedented financial crisis.

The signing of the landmark agreement was presided over by the Indonesian Minister of Foreign Affairs, H.E. Retno L.P Marsudi, together with Palestinian Foreign Minister Dr. Riad Al-Maliki, who was visiting Indonesia during the "Palestine Solidarity Week".

Minister Marsudi stated that “by signing a Zakat agreement between BAZNAS and UNRWA, Indonesia is opening a new funding opportunity for Palestine refugees. This can be a model for other countries to follow suit”.

The chair of the #Dignity Is Priceless campaign and UNRWA Director of Planning, Mr. Abdirahman Aynte signed the partnership on behalf of UNRWA.

“Indonesia’s leadership in Zakat assistance to Palestine refugees is significant in the humanitarian aid sphere,” said Mr. Aynte. “It is a pioneering opportunity for the UNRWA funding stream.”

Signing on behalf of BAZNAS, Ambassador Zainulbahar Noor said that, through the partnership with UNRWA, the Zakat agency will promote the #DignityIsPriceless campaign in Indonesia in solidarity with Palestine refugees.

UNRWA has been certified for Zakat eligibility by the National Zakat Foundation.

The National Zakat Board (BAZNAS) of the Republic of Indonesia is a non-structural government agency that manages zakat and other Islamic social funds Indonesia.