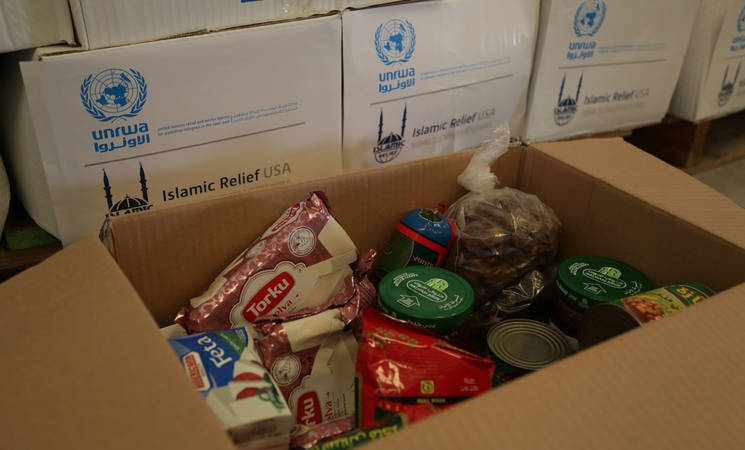 During the first three days of the Muslim holy month of Ramadan, UNRWA distributed Suhour food parcels to almost 6,248 Palestine refugee families in 10 distribution centres in all areas of the Gaza Strip. This distribution has been made possible thanks to a generous contribution of US$ 200,000 from Islamic Relief USA.

Suhour is the last meal Muslims consume in the early morning hours before the start of the daily fasting. Food parcels include items ranging from Halawa, Jam, canned foul, canned grind, chick peas, packages of tea, cheese and dried dates.

Emad Aldeen Aruoqi, a 35 year old father from Beach camp, west Gaza, is one of the refugees collecting a food parcel this month. “Life had been very hard for us in the last few years; it is hard to afford my five children even their basic needs” he said. “No work means no money to buy the Suhour needs for Ramadan, and with this Ramadan package, I feel it is a gift from Allah to my children.”

The families receiving this food assistance are classified by UNRWA as being “abject poor”, which means they have an income below US$ 1.47per person a day.

The Suhour food parcel distribution is part of the Agency’s effort to relieve food insecurity in the Gaza Strip. In June 2016, the blockade on Gaza entered its tenth year and continues to contribute to pushing the population into poverty, making them increasingly vulnerable to food insecurity.

Eighty per cent of the population in Gaza is dependent on aid. According to the World Bank, Gaza has one of the highest joblessness rates world-wide. The average unemployment rate during 2015 stood at 41.1 per cent, 36 per cent for men and 59.6 per cent for women, as reported by the Palestinian Central Bureau of Statistics (PCBS).