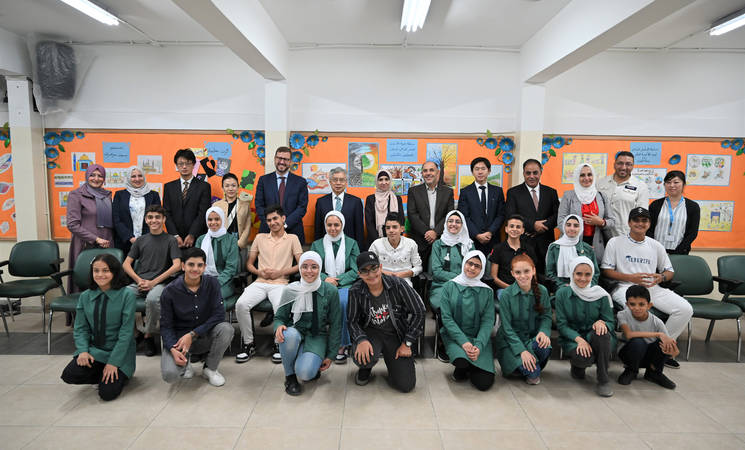 The Ambassador of Japan to Jordan, H.E. Kaoru Shimazaki, visited an United Nations Relief and Works Agency for Palestine Refugees in the Near East (UNRWA) school and health centre in Amman New Camp (ANC) today. He met with Palestine refugees and Agency staff. The Japanese delegation was welcomed by Acting Director of UNRWA Affairs in Jordan Mr. Olaf Becker and Acting Director of UNRWA Directorate at the Department of Palestinian Affairs, Ms. Heba Al Ma’ani.

H.E. Shimazaki met with Mr. Becker who conveyed the Agency’s appreciation to the Government of Japan for its financial and political support to Palestine refugees. The delegation then UNRWA Amman New Camp Preparatory Girls’ School students, as well as student parliamentarians. They later visited an UNRWA health clinic.

H.E. Shimazaki, said: “UNRWA has contributed to supporting Palestine refugees by helping them get access to essential services in their daily lives. Recognizing the significance of UNRWA operations from a humanitarian perspective and for the regional stability, we need to ensure UNRWA to fulfill its mandate for the well-being of Palestine refugees. Today, I was able to witness the lives of Palestine refugees and the commitment of UNRWA and Jordan on this issue.”

Acting Director of UNRWA Affairs, Mr. Olaf Becker said: “Japan has always been a committed partner to UNRWA. Today’s visit demonstrates Japan’s ongoing commitment in supporting Palestine refugees in Jordan. We thank the Government and people of Japan for this partnership and support.”

The delegation visited Palestine refugee communities of the UNRWA Social Safety Network Programme (SSNP). In Jordan, some 59,000 SSNP families receive SSNP support. An additional 28,000 families are also eligible but do not receive support to due shortage of funds. The SSNP aims to mitigate poverty among Palestine refugees, with priority focus on cases of extreme poverty.

UNRWA is a United Nations agency established by the General Assembly in 1949 with a mandate to provide humanitarian assistance and protection to registered Palestine refugees in the Agency’s area of operations, namely the West Bank, including East Jerusalem, the Gaza Strip, Jordan, Lebanon and Syria, pending a just and lasting solution to their plight. Thousands of Palestine refugees who lost both their homes and livelihood because of the 1948 conflict have remained displaced and in need of significant support for over seventy years. UNRWA helps them achieve their full potential in human development through quality services it provides in education, health care, relief and social services, protection, camp infrastructure and improvement, microfinance and emergency assistance. UNRWA is funded almost entirely by voluntary contributions.