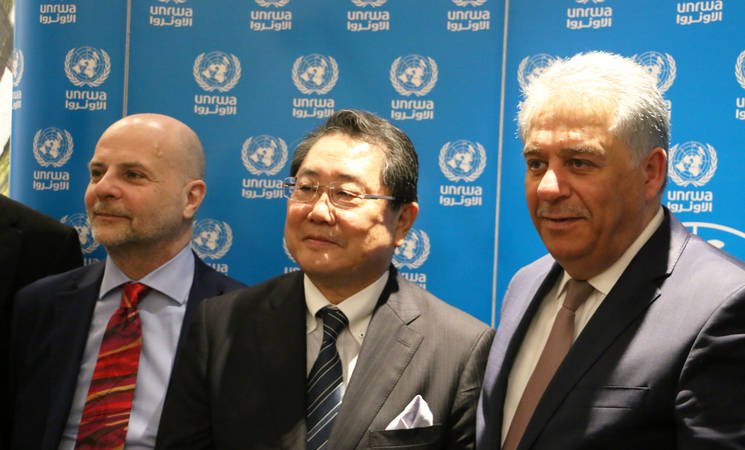 The Japanese Embassy and the United Nations Relief and Works Agency for Palestine Refugees in the Near East (UNRWA) held a ceremony in Beirut to announce a US$ 6.08 million contribution from the Government of Japan to the 2019 UNRWA Emergency Appeal and Programme Budget in Lebanon. The ceremony also recognized the US$ 3 million contribution by Japan in response to emergency needs and shelter rehabilitation in the al-Tireh in Ein El Hilweh camp following clashes in 2017.

The new agreement for the contribution of Japan to 2019 Emergency Appeal and Programme Budget was announced today by the Ambassador of Japan to Lebanon, His Excellency Matahiro Yamaguchi and the Director of UNRWA Affairs in Lebanon, Claudio Cordone in the presence of the Palestinian Ambassador to Lebanon His Excellency Ashraf Dabbour, who had called on the Japanese Ambassador to increase Japanese support to the Agency, in order to alleviate the suffering of the Palestine refugees in Lebanon. A representative of the Naba’a Development Action Without Borders non-governmental organization, Yasser Daoud also participated.

The contribution enables UNRWA to address environmental health and hospitalization needs for refugees in 2019. Through the 2019 Syria Regional Crisis Emergency Appeal, urgent water and sanitation needs, as well as solid waste management will continue to be supported, in addition to secondary and tertiary hospitalization care for approximately 6,165 Palestine refugees, from both Lebanon and Syria. In addition, this funding will cover the cost of medication for those eligible. The Programme Budget will allow fifty UNRWA medical officers to complete a twelve-month Family Medicine Diploma facilitated through the UK-based Rila Institute of Health Sciences, expanding the training of UNRWA physicians. Further, a medication information system will be implemented.

In November 2017, Japan and UNRWA, in coordination with the Embassy of Palestine, signed an agreement of US$ 3 million contribution towards the Agency’s humanitarian response in Ein El Hilweh camp. This contribution provided UNRWA with the funding necessary for the rehabilitation of 974 damaged shelters affected by the clashes in addition to the rehabilitation of four community buildings, including two mosques. This was carried out in close coordination with implementing partner Naba’a, which was responsible for the completion of works on 761 shelters, and whose support was instrumental in the accomplishment of this project. As part of a wider effort together with the European Union to respond to the immediate needs of families affected by the violence, this contribution by the Government of Japan also provided emergency cash assistance in the form of housing and food assistance to approximately 140 families.

Ambassador Yamaguchi said: “I am positive the new US$ 6 million grant will support UNRWA efforts to alleviate the burdens faced by Palestine refugee communities in Lebanon.” He added, “Unfortunately, despite Lebanon’s generous hospitality toward refugees, Palestine refugees in Lebanon still suffer from legal restrictions that limit their rights. Therefore, Japan will continue to support the people of Palestine, especially this young generation of Palestine refugees and to help them to access basic services. We seek to empower them to realize their full potential and ambitions.”

Ambassador Dabbour said: “I would like to thank the Government of Japan, who responded quickly to our appeal to alleviate the suffering of our people in al-Tireh. This response is a model for responding to the call of humanity and an important factor contributing to the alleviation of suffering of our refugee people in Lebanon and displaced refugees from Syria. We also thank UNRWA and its management for their efforts in all the places that Palestine refugees are. The Agency contributes to improving their living conditions and protects all their rights.”

Mr. Cordone expressed his deep gratitude to the sustained support of the Government of Japan to UNRWA and to Palestine refugees over the years: “Contributions from Japan will help ensure that the Agency continues to provide critical health and infrastructure assistance to the most vulnerable Palestine refugees in Lebanon.  Japan’s support to UNRWA was also remarkable in enabling refugees affected by violence in al-Tireh Sector live in dignified conditions.”

Mr. Daoud said: “The reconstruction of al-Tireh and affected neighborhoods have reduced the level of tension in the camp.”