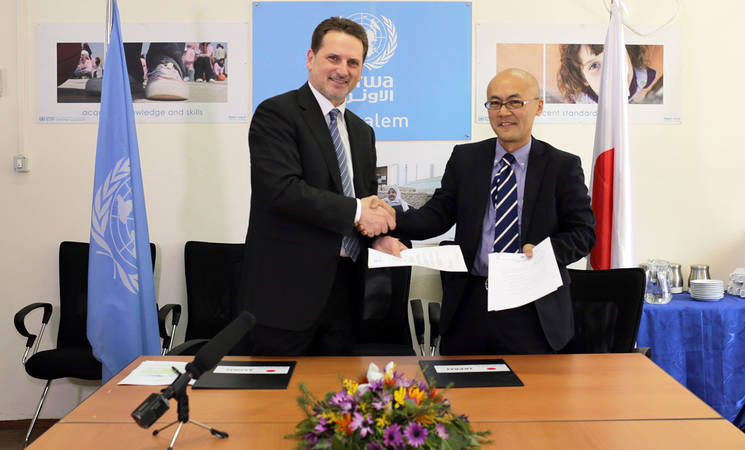 Japan has announced a new US$ 32.2 million contribution to UNRWA. The donation will support urgent relief and recovery needs in Gaza, emergency assistance for Palestine refugees affected by the conflict in Syria, and the continuation of essential UNRWA services in the occupied Palestinian territory, Lebanon, Syria and Jordan.

This donation is the largest ever one-time contribution from Japan to UNRWA. Japan’s total annual contribution in 2014 was US$ 28.3 million, a considerable increase from US$ 15.5 million in 2011.

UNRWA Commissioner-General Pierre Krähenbühl said: “We are extremely grateful for the increased assistance from the Government of Japan, a trusted and valued partner of UNRWA and Palestine refugees. This support, which could not be more timely, is a crucial step towards helping Palestine refugees rebuild in Gaza, survive the extreme hardship resulting from the Syria crisis and access their basic needs elsewhere in our area of operations. It is an important contribution to dignity, human security and the hope for peace in this volatile region.”

US$ 14 million of the Japanese contribution will go towards the UNRWA cash assistance programme supporting repairs and rental subsidies for Palestine refugees rendered homeless by last summer’s conflict in Gaza – a programme that UNRWA was forced to suspend last month due to lack of funds.

Gaza and Japan have built a close relationship in recent years, with Palestinians in Gaza holding a solidarity event to commemorate the Japanese Tsunami Disaster area every March. The event is planned again this year despite the devastation left by the recent hostilities.

Junya Matsuura, Ambassador for Palestinian Affairs and Representative of Japan to the Palestinian Authority, said: “Assistance to Palestine refugees through UNRWA has been always one of the pillars of Japan’s peace efforts in the region. Palestine refugees in the West Bank, Gaza, Jordan, Lebanon and Syria need international assistance more than ever, especially in Gaza and Syria to face the severe political and economic situations surrounding them. Japan will continue its efforts in helping UNRWA mitigate the suffering of the Palestinian people, including women and children.”

US$ 18 million of the contribution will support general and emergency health services in the occupied Palestinian territory, Lebanon and Syria, and education in Lebanon. UNRWA is the sole agency responsible for essential services for Palestine refugees, meaning the support from Japan will have a direct positive impact on the well-being of some of the most vulnerable people in the Middle East.

A further US$ 200,000 will help Palestine refugees affected by the conflict in Syria survive the harsh winter conditions through the provision of blankets and mattresses in Syria and emergency cash assistance for the most vulnerable of those displaced to Lebanon and Jordan.