Home » Newsroom » Press Releases » Japan Contributes US$ 23.5 million to UNRWA in Support of Palestine Refugees
Back to Newsroom

Japan Contributes US$ 23.5 million to UNRWA in Support of Palestine Refugees 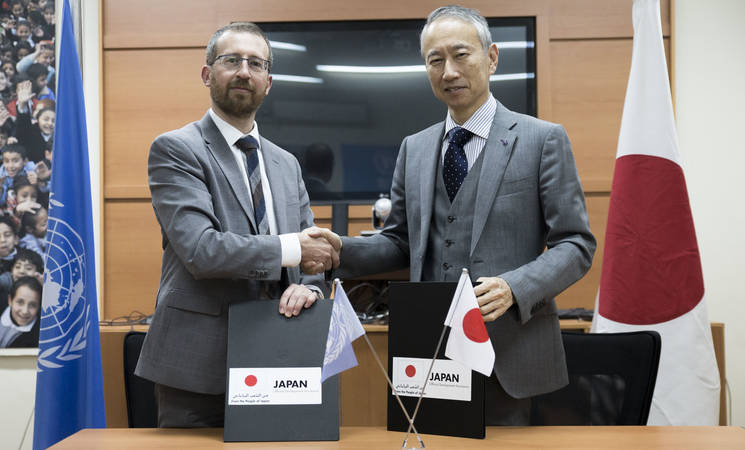 The Government of Japan has contributed US$ 23.5 million to the United Nations Relief and Works Agency for Palestine Refugees in the Near East (UNRWA). yesterday, an agreement was jointly signed by the Japanese Ambassador for Palestinian Affairs and Representative of Japan to Palestine, Mr. Takeshi Okubo, and the Chief Donor Relations Division of UNRWA, Mr. Marc Lassouaoui.

Of the total contribution, US$ 19 million will go towards the Agency’s core programme of education, health care and improved living conditions for 5.3 million Palestine refugees across UNRWA’s fields of operations. The support from Japan will have a direct positive impact on the well-being of some of the most vulnerable people in the Middle East. An additional 3.5 million will be used to improve the quality of UNRWA health services in the occupied Palestinian territories, Lebanon and Syria and another US$ 1 million will help respond to critical needs in the Wavel camp in Lebanon. Finally, a further US$ 600,000 will contribute to the education of Palestine refugee children affected by the conflict in Syria.

Ambassador Okubo welcomed the additional funding: “I am pleased to announce this new contribution from the Government of Japan to UNRWA as a part of new assistance of some US $40 million Palestine for the year 2018. With this new contribution, a total value of Japanese assistance to the Palestinian people will reach US$ 1.86 billion since 1993.”

Mr. Lassouaoui expressed gratitude on behalf of the Agency. “I thank Ambassador Okubo for his personal commitment to UNRWA and the Palestine refugees, and the Government of Japan for its longstanding partnership and strong support to the mandate of UNRWA as reflected in this generous contribution.”

Japan has long been a valued donor to UNRWA. In 2017, the Government of Japan contributed a total of US$ 43.3 million, including some US$ 23 million to the Agency’s core programmes and services, US$ 8.7 million to support the Agency’s emergency programmes in Syria and the occupied Palestinian territory, and US$ 11.5 million for essential projects. Japan was among the top 7 donors and, since 1973, has been a member of the UNRWA Advisory Commission, which advises and assists the UNRWA Commissioner-General in carrying out the Agency’s mandate.