Home » Newsroom » Press Releases » Japan Contributes US$ 28.4 Million to UNRWA in Support of Palestine Refugees
Back to Newsroom

Japan Contributes US$ 28.4 Million to UNRWA in Support of Palestine Refugees 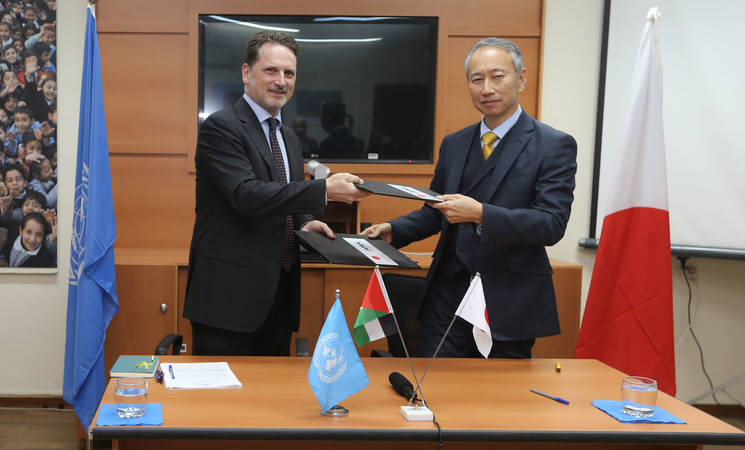 The Government of Japan has contributed US$ 28.4 million to the United Nations Relief and Works Agency for Palestine Refugees in the Near East (UNRWA) in support of the Agency’s core programmes, emergency response efforts and priority projects.

Of the total contribution, US$ 17.7 million will go towards the Agency’s core programmes and services, encompassing education for half a million Palestine refugee children and youth, health care for more than 3.5 million patients, and social services for nearly 300,000 vulnerable refugees. US$ 5.2 million will support the Agency’s emergency operations in the occupied Palestinian territory (oPt), including the West Bank and Gaza, while US$ 3.5 million will go towards UNRWA emergency interventions in response to the ongoing crisis in Syria. The final US$ 2 million will help fund UNRWA projects in Lebanon, Syria and Gaza.

The contribution agreement was signed on 23 February by the UNRWA Commissioner-General, Pierre Krähenbühl, and the Japanese Ambassador for Palestinian Affairs and Representative of Japan to the Palestinian Authority, Takeshi Okubo, at UNRWA Headquarters in East Jerusalem.

“The Government and people of Japan are remarkable partners of UNRWA, and we remain ever grateful for their support and their demonstrated solidarity with Palestine refugees,” said Mr. Krähenbühl. “The partnership with Japan remains critical, not only in addressing the most critical challenges facing Palestine refugees today, but also in preserving opportunities and hope, particularly for the youth.”

“The 5.3 million Palestinian refugees residing in UNRWA’s five fields need much more support than ever from the international community, especially in Gaza and Syria, given the worsening socioeconomic conditions, as well as an increased demand for services resulting from the growing population,” said Mr. Okubo, Ambassador for Palestinian Affairs and Representative of Japan to the Palestinian Authority. “We appreciate UNRWA’s commitment and dedication to the protection of human rights and enhancement of human dignity of Palestinian refugees through its services. I hope people in dire situations will receive our message through UNRWA’s assistance that the international community stands beside them at all times.”