Home » Newsroom » Press Releases » Japan contributes US$ 38.21 million to UNRWA to support Palestine refugees in Gaza, the West Bank, Lebanon and Syria
Back to Newsroom

Japan contributes US$ 38.21 million to UNRWA to support Palestine refugees in Gaza, the West Bank, Lebanon and Syria 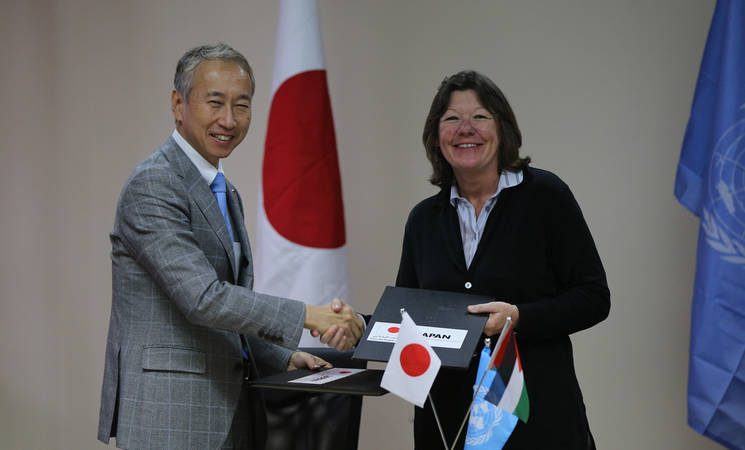 The Government of Japan has contributed US$ 38.21 million to the United Nations Relief and Works Agency for Palestine Refugees in the Near East (UNRWA). The contribution was confirmed earlier today in an agreement jointly signed by Ambassador Takeshi Okubo from the Representative Office of Japan to the Palestinian Authority (PA) and UNRWA Deputy Commissioner-General Sandra Mitchell at the Agency’s Kalandia training center in Ramallah.

This donation marks the largest ever one-time contribution from Japan to UNRWA. Of the total contribution, US$ 15 million will support the Agency’s health and education services and emergency humanitarian assistance efforts in the Gaza Strip; US$ 20.87 million will go towards improving and expanding the capacity of the Agency’s education and health programmes in the West Bank, Lebanon and Syria; and US$ 2.34 million will support the construction of a sewerage network in Aqbat Jabr refugee camp in the West Bank. The network will be connected to the Jericho wastewater treatment plant constructed by Japanese Grant Aid and supported by the Japan International Cooperation Agency (JICA).  The construction of sewerage network will also be done in collaboration with JICA.

“This support will go a long way in providing for the education and health needs of Palestine refugees throughout the region and ensuring that refugees in Gaza will have the food, shelter and employment opportunities they need to endure the challenges stemming from repeated conflict, chronic poverty and a crippling blockade,” said Sandra Mitchell. “We are deeply grateful to Japan, not only for this generous contribution, but also for their long-standing friendship with UNRWA. For decades, this dynamic and steadfast partnership has been critical in improving the living conditions and prospects of Palestine refugees.”

He also added: “Japan has recently decided to provide the new package of assistance amounting to US$ 78.2 million to the Palestinians, including the above-mentioned assistance through UNRWA as was announced during the visit of President Abbas to Japan this month. With this new assistance, the total value of Japanese assistance extended to the Palestinian people exceeds US$ 1.7 billion since 1993.”

Japan has long been a valued donor to UNRWA. Last November, the Commissioner-General met with Japanese Prime Minister H.E. Shinzo Abe during his visit to Tokyo, where he expressed his profound gratitude for Japan’s continued support to Palestine refugees and to the Agency’s human development activities. In 2015, the Government of Japan contributed a total of US$ 39.20 million, including US$ 19.75 million to the Agency’s core programmes and services, US$ 14.20 million to support the Agency’s emergency programmes in Syria and the occupied Palestinian territory, and US$ 5.25 million for food assistance for abject-poor Palestine refugees.