Japan contributes US$ 7 Million for Emergency Assistance in Syria 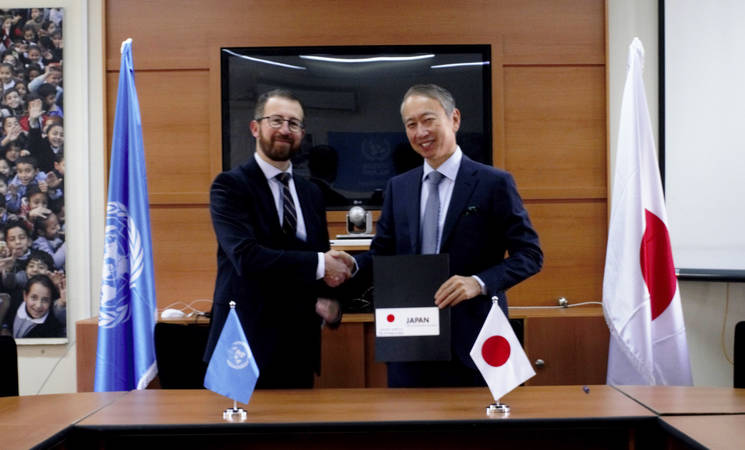 The Government of Japan has contributed an additional US$ 7 million to the United Nations Relief and Works Agency for Palestine Refugees in the Near East (UNRWA). On 4 March, an agreement was jointly signed by the Japanese Ambassador for Palestinian Affairs and Representative of Japan to Palestine, Mr. Takeshi Okubo, and the Chief Donor Relations Division of UNRWA, Mr. Marc Lassouaoui.

Ambassador said: “I’m very happy to share with you that the Government of Japan has decided to contribute 7 million US dollars to UNRWA for the project entitled “Emergency Grant Aid in response to the humanitarian crisis in Syria and Lebanon” that is followed by the recent commitment of Japan to contribute USD 23 million to UNRWA from the supplementary budget of FY 2018. We are determined more than ever to send a message to Palestine refugees through the assistance that “A friend in need is a friend indeed. Japan will be there with you.” at a time when the region is experiencing serious humanitarian crisis. With this new assistance, the total value of Japanese assistance to the Palestinian people has already exceeded 1.9 billion US dollars since 1993.”

The Chief Donor Relations said: “On behalf of UNRWA, I would like to thank Ambassador Okubo for his personal commitment to the Agency and the Palestine refugees.” He added that “The Government of Japan has been exemplary in its support to the Agency. We deeply appreciate this very generous gesture towards this vulnerable community.”