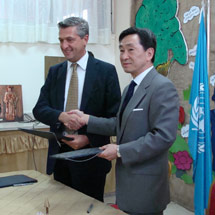 The government of Japan has announced a donation of US$ 7.7 million (600 million Japanese yen) towards food aid as part of UNRWA’s social safety-net programme for 2011 and 2012. The programme, aimed at alleviating poverty among Palestine refugees, provides food aid and cash subsidies to more than a quarter of a million impoverished people in Gaza, the West Bank, Jordan, Syria and Lebanon. The Japanese contribution will help UNRWA provide vulnerable refugees with food including wheat flour and pulses. Families benefiting from the social safety-net receive food packages every three months, including sugar, rice, oil and milk powder.

UNRWA Commissioner-General, Filippo Grandi, welcomed the Japanese contribution, saying: “I would like to thank the government and people of Japan for this contribution especially this year when Japan was hit with the earthquake and tsunami.” He continued: “Food aid is one of two components of a programme targeting the neediest refugees.”

The agreement was signed today at the UNRWA Baqa’a Elementary Co-Ed School in Baqa’a camp, Jordan, by Mr Grandi and the Japanese Ambassador to Jordan H.E. Junichi Kosuge.

Speaking at the ceremony, HE Mr. Kosuge said: “Japan has been and will continue to be proactively involved in assistance to the Palestinian people and making efforts towards peace in the region.” He continued: “Japan considers UNRWA as an important partner to realise our diplomatic principle of human security and to promote peace in the region.”

Japan’s assistance to the Palestine refugees through UNRWA, which began in 1953, has amounted to approximately US$ 600 million, including this year’s food aid contribution. Japan has been providing food aid to UNRWA since 1967, and is among a number of donors that today regularly contribute to UNRWA’s social safety-net programme.