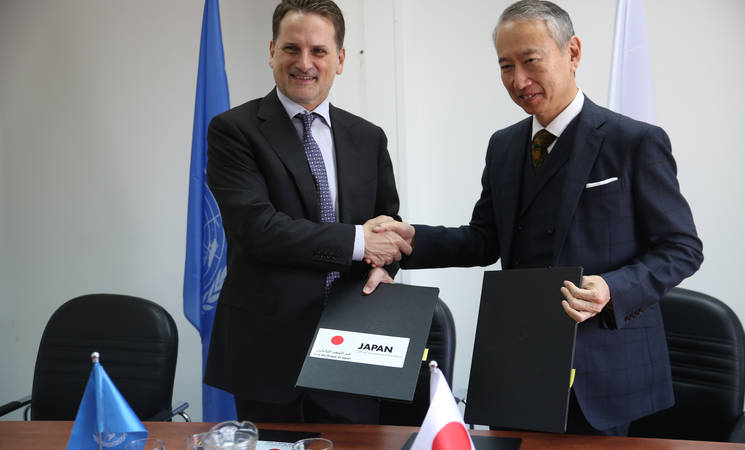 The Japanese Ambassador for Palestinian Affairs and Representative of Japan to Palestine, Mr. Takeshi Okubo, and Commissioner-General of the United Nations Relief and Works Agency for Palestine Refugees (UNRWA), Mr. Pierre Krähenbühl, attended a signing ceremony for two Japanese contributions, namely the Solar Panel Project in Gaza worth US$ 4.4 million and a Japanese staff secondment to the UNRWA External Relations Department.

The Commissioner-General expressed gratitude to the Government of Japan for its long-term support of Palestine refugees. The addition of solar panels to health centres across Gaza will provide a renewable energy source. Further, this contribution will enable the Agency to decrease its fuel consumption costs by some US$ 500,000 per year.

In addition to the important innovation and efficiencies introduced by the solar panel contribution, the Agency appreciates the secondment of a Japanese staff member to the UNRWA Department of External Relations and Communications (or…the External Relations Division). As the Agency recovers from the most severe budget deficit in its history, confidence in UNRWA staff capabilities will allow for advances to be made in fundraising and donor relations.

Commissioner-General Krähenbühl praised this innovative contribution: “We deeply appreciate the generosity and steadfast support of the Government of Japan to UNRWA and the Palestine refugee community. These solar panels not only move the Agency in the direction of sustainable energy practices but also allow for vital savings at a time that UNRWA needs it most. Your Excellency, Mr. Okubo, I would like to take this opportunity to thank you for your strong support to Gaza, and the millions of Palestine refugees your contribution will benefit.”

Ambassador Okubo highlighted the importance of the Agency’s services in Gaza and noted: “Japan has been and will be a strong supporter to UNRWA as it provides invaluable health, relief and educational assistance to Palestine refugees in Gaza and beyond, thereby contributing to the stabilization of the entire region. This support reflects the confidence of Prime Minister Abe. We continue to support Palestine refugees together with our fellow nations.”

He also added that CEAPAD (Conference on the cooperation among East Asian countries for Palestinian Development.) mechanism driven by the Japanese initiative will further contribute to diversify the financial base for UNRWA.

Japan has long been a valued donor to UNRWA. In 2017, the Government of Japan contributed a total of US$ 43.3 million, including some US$ 23 million to the Agency’s core programmes and services. Japan was among the top seven donors and, since 1973, has been a member of the UNRWA Advisory Commission, which advises and assists the UNRWA Commissioner-General in carrying out the Agency’s mandate. 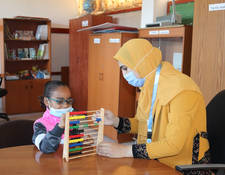