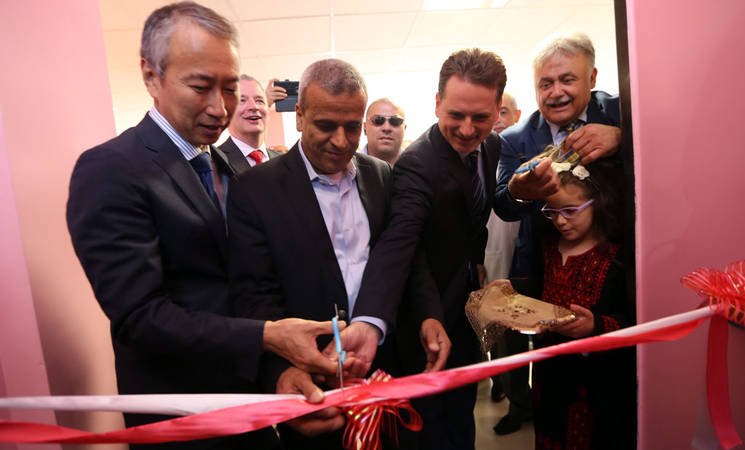 The Representative of Japan to the Palestinian Authority, Ambassador Takeshi Okubo, and the Commissioner-General of the United Nations Relief and Works Agency for Palestine Refugees in the Near East (UNRWA), Pierre Krähenbühl, inaugurated the newly reconstructed Health Centre in Qalqilya in the West Bank earlier today. The inauguration ceremony was held in the presence of the Governor of Qalqilya, Rafa’ Rawajbeh; the Mayor of Qalqilya, Othman Daoud; representatives of the Palestinian community; and UNRWA staff.

The reconstruction of the Qalqilya Health Centre was made possible as part of a generous US$ 4.2 million grant from the Government of Japan, on behalf of the people of Japan. The grant is aimed at enhancing the diverse health services delivered to Palestine refugees, namely the implementation of the Family Health Team approach, the E-Health system and the improvement of health infrastructure throughout the West Bank.

UNRWA deeply welcomes the reconstruction of the Qalqilya Health Centre, which will provide improved quality and more timely health services to Palestine refugees in a spacious Centre.

The cost of the reconstruction of the Qalqilya Health Centre amounted to US$ 2 Million, allowing UNRWA to expand, renovate and equip it with the latest medical equipment in order to adequately address the medical needs of patients. The new Health Centre has a broad range of health facilities, including specialist doctors’ rooms, a physiotherapy unit, a laboratory, a lab technician room, and a blood bank. The Centre will serve approximately 54,000 patients annually.

At the inauguration, Ambassador Takeshi Okubo said: “Assistance to Palestinian refugees through UNRWA has always been one of the pillars of Japan’s peace efforts in the region. Palestinian refugees need robust support from the international community. The Government of Japan is therefore determined to continue its assistance to them through UNRWA, especially in the fields of health and education. Our special thanks go to Dr. Akihiro Seita, Director of Health of UNRWA, who has vigorously worked on the reforms for the health sector. I really hope that this new Health centre will play a central role in enhancing health services in Qalqilya.”

UNRWA Commissioner-General Pierre Krähenbühl said: “We extend our sincerest words of appreciation and respect to the government and people of Japan for the generous donation, which will make such an important contribution to improving the delivery of health care in this part of the West Bank. The solidarity and support shown yet again by Japan with this donation are remarkable."