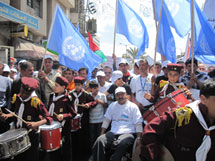 The job creation programme (JCP) celebrated International Labour Day by organising a march for JCP’s beneficiaries in Nablus in the presence of Barbara Shenstone, director of UNRWA operations in the West Bank, and representatives from the local community. Participants carried banners and signs asking all the actors in the Palestinian territories to play a more effective role in providing decent work for Palestinian labourers.

Shenstone addressed the beneficiaries: “I am delighted to show my support to the JCP today on the occasion of International Labour Day. This programme is incredibly important as it supports refugees in the current socio-economic crisis. It is the largest job creation programme in the West Bank, creating some 7,100 job opportunities every month and distributing some US$ 35 million every year. I want to pass my sincere congratulations to everyone, especially the workers themselves.”

UNRWA’s emergency job creation programme helps poor refugee families to cope with the socio-economic crisis. Refugees are one of the groups worst affected by economic hardship, as they have already been made vulnerable by the conflict, confiscation of, or inaccessibility to cultivated land, destruction and closure of shops, loss of employment in Israel and lack of mobility to reach new job markets. In an effort to reduce the number of refugee households living below the poverty line, the intervention aims to provide a subsidy in exchange for labour.

JCP targets different groups in the Palestinian community. It enables families to cover their basic household needs such as food, school fees and healthcare. JCP’s monitoring reports indicate that roughly half of the subsidy received is spent on food, with the other half contributing to health, education and debt payments.

Each month, nearly 40 per cent of the programme’s labourers are women, surpassing its target of 35 per cent female participation. Bedouin herders have been able to benefit greatly from job opportunities. This group are among the poorest refugees in the West Bank, as their cost of living has been severely affected by confiscation of, and lack of access to, grazing lands and water resources. JCP designs interventions that suit their particular skills, such as tapestry, carpet weaving, cottage farming, and their needs, such as the rehabilitation of schools, herb gardens and shelters.

JCP contributes to UNRWA’s protection strategies by integrating specially designed protection-related projects in areas where refugees are in danger of forced displacement or particularly affected by the Barrier and land confiscations.

JCP is funded by numerous donors, mainly the US, Switzerland, Belgium, Holland and ECHO, the European Commission’s humanitarian aid department.