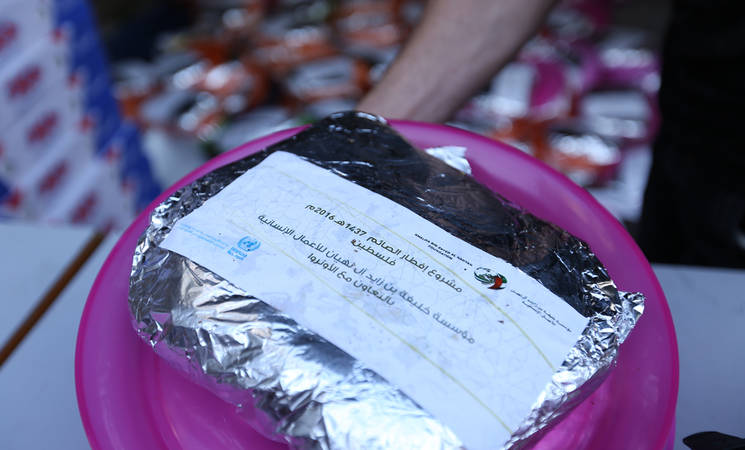 On 24 and 25 of June during the holy month of Ramadan, UNRWA distributed 9,809 hot meals for a total of 26,557 impoverished Palestine refugees in the Gaza Strip due to the generous support from the Emirates-based Khalifa Bin Zayed Al Nahyan Foundation.

The benefitting families are categorised by UNRWA as Abject Poor, meaning those households who live below US$ 1.47 per person per day and do otherwise not have access to hot meals to break the fasting during Ramadan.

The hot meals were distributed through 20 Community-Based Organizations (CBOs) across the Gaza Strip. The refugees were able to access their hot meals using coupons. Each coupon included cooked rice and cooked chicken, as well as yogurt and dates.  The beneficiaries received the dinners at the CBOs and then took them home to share them with family members.

“Due to the deteriorated economic situation and high unemployment rates in Gaza, many poor Palestine refugee families do not have access to hot meals, especially in Ramadan. Thanks to Khalifa Bin Zayed Al Nahyan Foundation we were able to provide thousands of families with a festive meal,” commented Mohammed Abu Daya, a Programme Officer of the UNRWA Relief and Social Services Programme.

The distribution of hot meals was implemented under the “Feed the Fasting” project; this project is framed within the UNRWA Emergency Food Assistance Programme and aims at easing food insecurity in the enclave and providing refugees with a decent standard of living.

The blockade on Gaza, now in its tenth year, and repeated cycles or armed conflict, have crippled the enclave’s trade sector and pushed a large part of the population into poverty and misery. The unemployment rate in Gaza stood at 41.2 per cent in the first quarter of 2016, according to the Palestinian Central Bureau of Statistics.  It is practically unchanged from the unemployment rate for 2015 overall (41.1 per cent). This is higher than any other economy of the world, as reported by the World Bank. Today, approximately 80 per cent of the population in Gaza depend on humanitarian assistance to meet their basic needs. While in the year 2000, UNRWA provided approximately 80,000 refugees in Gaza with food assistance, this number has increased to more than 930,000 today – almost 70 per cent of the refugee population and over 50 per cent of the total population. Basic in-kind food assistance enables poor households to allocate their limited resources to other relevant items such as fresh vegetables, meat or school stationary for their children.