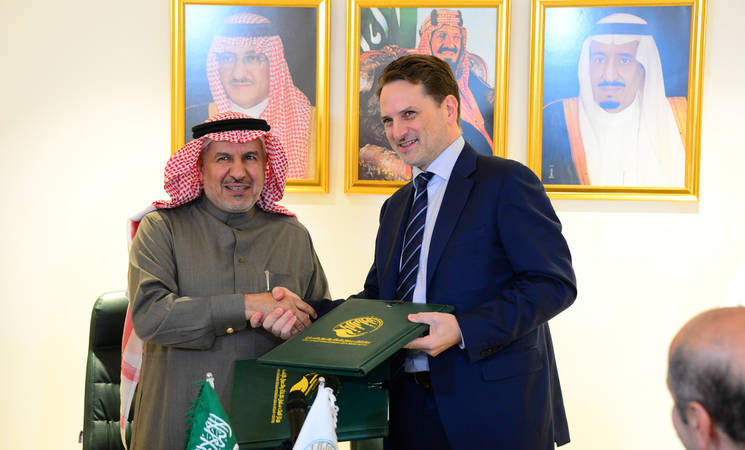 The King Salman Center for Humanitarian Aid and Relief (KSRelief) has contributed US$ 1 million to the United Nations Relief and Works Agency for Palestine Refugees in the Near East (UNRWA) to help provide urgently needed food assistance to Palestine refugees in Syria. The contribution was detailed in the first cooperation agreement between KSRelief and UNRWA, which was signed in Riyadh on 27 November by UNRWA Commissioner-General Pierre Krähenbühl and HE Dr. Abdullah al-Rabeeah, Adviser at the Royal Court and General Supervisor of KSRelief.

“I would like to express my deepest gratitude to the King Salman Center for Humanitarian Aid and Relief for this generous contribution.  It will help ensure that Palestine refugees affected by the devastating conflict in Syria feel they are not forgotten, particularly as the harsh winter months approach,” said Mr. Krähenbühl. “We are deeply encouraged by this promising new agreement with the Centre, as well as by our continued partnership with the Kingdom of Saudi Arabia. It has enabled us to provide critical services to Palestine refugees across the region, including in times of emergencies.”

From his side, HE Dr. al-Rabeeah said, “We look forward to a long, successful partnership with UNRWA. We place great trust in the Agency and are very appreciative of the role it plays in diligently assisting Palestine refugees.”

KSRelief was established on 13 May 2015, under the sponsorship of His Excellency, the Custodian of the Two Holy Mosques, King Salman bin Abdulaziz. While this agreement marks the first cooperation with KSRelief, the Kingdom of Saudi Arabia is currently the second-largest donor to UNRWA and has been a member of the Agency’s Advisory Commission since 2005.