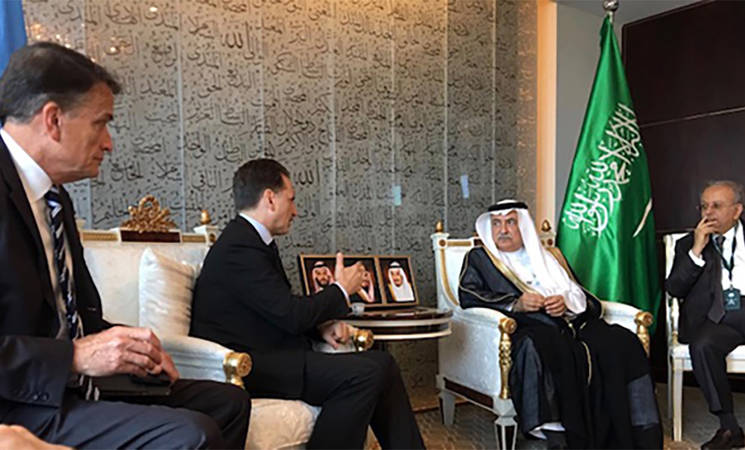 H.E. Mr. Ibrahim bin Abdulaziz Al-Assaf, Foreign Minister of the Kingdom of Saudi Arabia, announced on September 26  a contribution of US$50 Million to the core program budget of UNRWA for 2019.  In a meeting with UNRWA Commissioner-General Pierre Krähenbühl on the margins of UN General Assembly in New York, the Foreign Minister reaffirmed Saudi Arabia’s position as one of the strongest political and financial supporters of UNRWA. He expressed strong recognition for the work carried out for Palestine refugees.

The announcement matches the extraordinary contribution the Kingdom made to the UNRWA program budget in 2018 and is in addition to generous contributions by Saudi Arabia to UNRWA infrastructure projects across the Agency’s five areas of operations.  The Commissioner-General expressed his deep appreciation on behalf of the 5.5 million Palestine refuges served by UNRWA.

“The renewed and generous donation by the Kingdom of Saudi Arabia is of great significance to our Agency. Throughout the summer, as we prepared for the opening of the new scholastic year, we rehabilitated dozens of UNRWA schools with Saudi funding. The crucial contribution announced today will allow us to preserve the right to education of our 532, 000 students, as well as other core services to Palestine refugees. We are very grateful for the dynamic partnership and cooperation with the Kingdom”, said Mr Krähenbühl.

During the high-level week of the General Assembly, the Commissioner-General also visited the exhibition, “Kingdom of Saudi Arabia’s efforts in supporting refugees around the world” of the King Salman Humanitarian Aid and Relief Center, where he discussed with Dr. Abdullah Al Rabeeah, Supervisor General, the important UNRWA collaboration with the center.  The Commissioner-General also had the honor to meet with H.E. Mr. Adel bin Ahmed Al-Jubeir, Minister of State of the Kingdom of Saudi Arabia, during the opening session of the General Assembly.